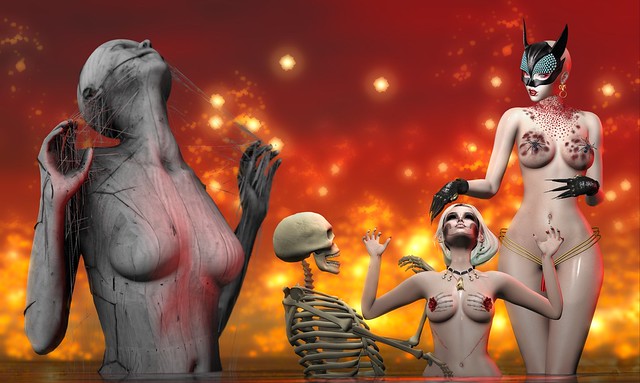 Well, Elemiah is of course!! 😀

ELEMIAH – seated on the left – is wearing the following:

Baiastice_Bellatrix-Gold Necklace … made by Sissy Pessoa.

Baiastice_Bellatrix-Cat Mask … made by Sissy Pessoa.

CHAMELEON ” Hickey ” Maitreya … made by VESNULYA Resident. Purchased inworld on August 31st, 2019 at the Atlantis World SIM although you can also get these amazing/daunting breast hickeys on Second Life MarketPlace.
CHAMELEON – ” Hickey ” Fatpack for body Maitreya and Omega

Mr skeleton 5 … made by Evangeline Cortes.