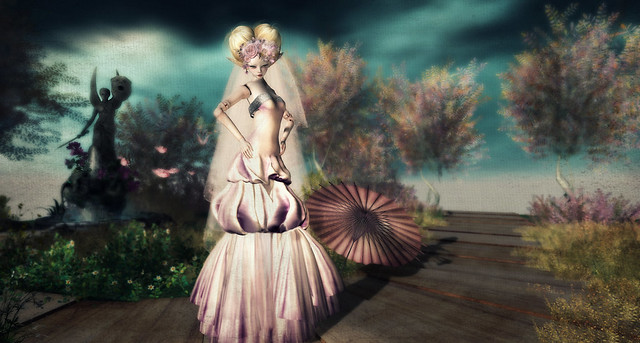 I took this picture in the Mysterious Wave SIM, which is an art project and store owned by Anley Piers and Cherry Manga. Currently it is hosting the Childhood installation by Cherry Manga.

* Hair ~Tableau Vivant~ Hill – Dreads series – F fit. This has a HUD and I used it to change the colour to a dark grey, although I could have been pink or blue! NEW.

* Madrid Solo- Male Designs- Bad To The Bone- Full Set … it’s the makeup across the top of my face (a bit like a painted mask) and the lip colour.

* Sign – !bang – Talk Nerdy made by Luna Jubilee. Purchased in December 2013.
The sign has a built-in pose called talknerdy, which is enacted when you hold it.

Mysterious Wave allows rezzing of objects but only has a five minute window before Auto-Return kicks in. So I attached the other prop in this picture to myself and edited it into position in the final image. That prop is TBF Retro Radio (Lemon), which is made by Arduenn Schwartzman. I bought it at Warbug Headquarters (see his Profile Picks) and it was either free or virtually free.

The pose I am using is talknerdy – an inbuilt pose made by Luna Jubilee, which is activated when you hold the “Talk Nerdy To Me” sign.

The FutureWave event in Second Life is now over but on the very last day I went on a spending spree in the Cursed SIM. So much of what I am wearing in this picture was purchased there.

~*By Snow*~ Citadel Eyes (Chrome – Red) … made by Snow Frostwych. These were part of a FatPack of eyes that I purchased at FutureWave. NEW.

CMFF FemDroid – Security Enforcement – Legs … made by Chip Midnight. Purchased at FutureWave. NEW.
(I bought the whole avatar but only attached my legs and used two different alphas so that the entirety of my body and head didn’t disappear, as it would have if I had used the FemDroid alpha).

The pose that I used for this picture was . Infiniti . – Abduction 9, which is made by Brandi Monroe. It is one of the poses in her Abduction set. However I have loaded these poses into a pose stand which was then tilted at about 45 degrees to get this pose effect.