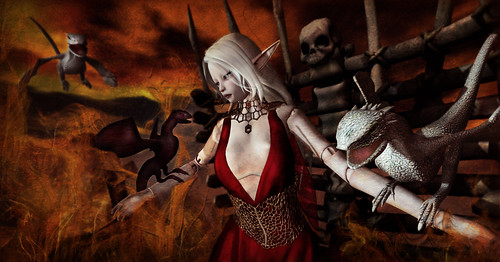 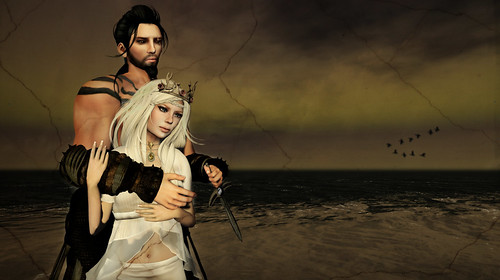 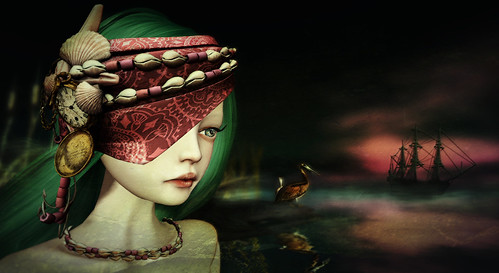 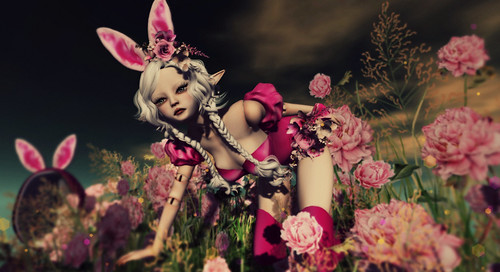 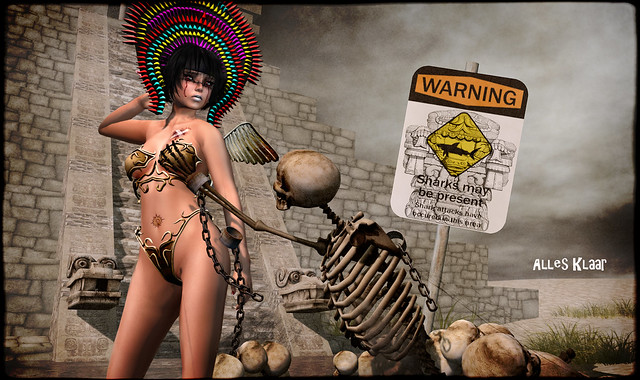 I posted a virtually raw version of this picture on my Flickr pages a couple of weeks back and then forgot to blog it … how dumb of me was that?

Anyway, this is now the fully cooked version of that picture and is visible to all and sundry and not about time, eh! I’m wearing parts of the the new and fabulous War Kitten outfit from PFC (Pucca Firecaster’s Creations) in this picture plus one of the new Teteoinnan headpieces by Riri Bazar from h.m.a.e.m. (hate me and eat me). There are four versions of this headpiece and I have chosen the most colourful one to wear – naturally!! ^^

The Teteoinnan headpieces are available as an exclusive for the SAVIAD Spring Fair, which means that you have to rush now to grab it as the fair closes on March 31st. I’m wearing the er, h.m.a.e.m. – Teteoinnan headpiece – 001a 1 version. NEW. http://maps.secondlife.com/secondlife/SaliMar/233/197/2806

The War Kitten outfit is currently available at the We Love RP event. NEW. http://maps.secondlife.com/secondlife/Evanda%20Island/159/44/4002 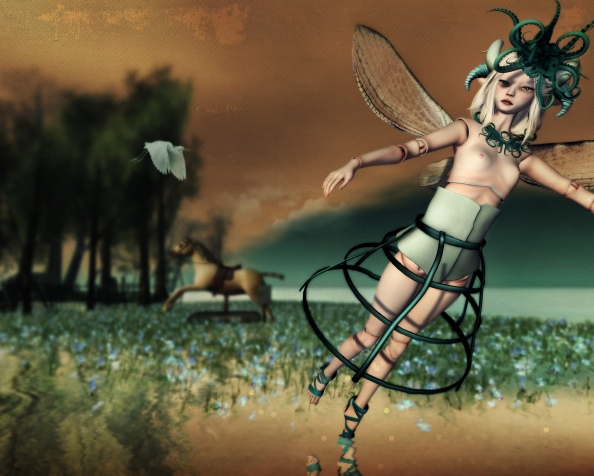 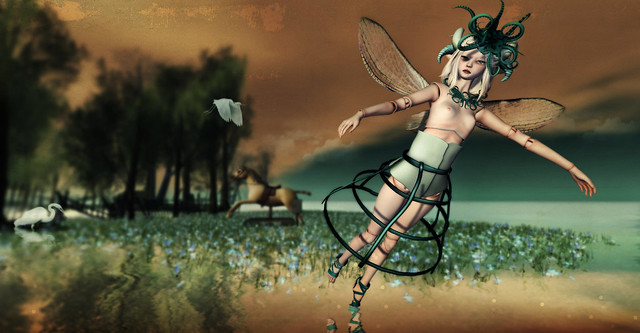 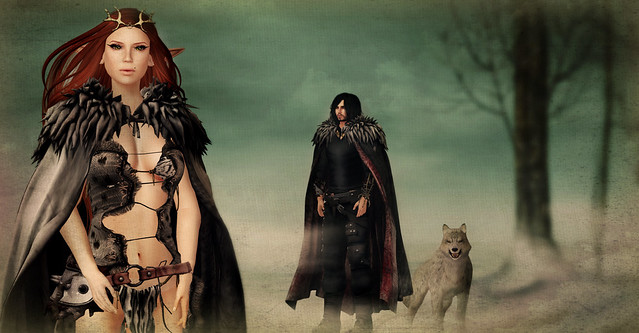 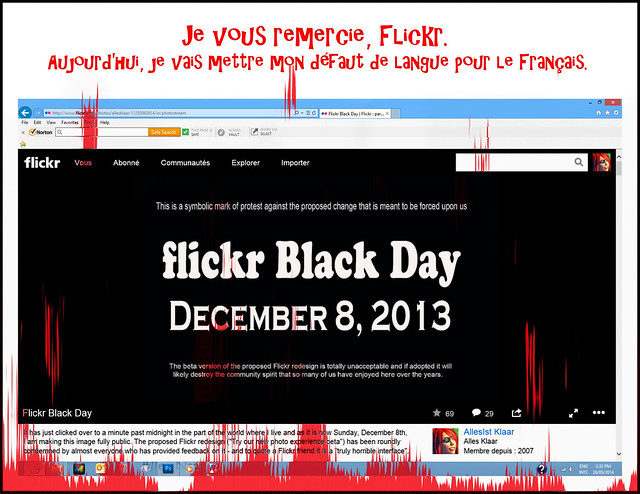 The two pictures below show the difference in the photo-page presentation between the “old” Flickr format (in use from May 20th, 2013 until March 25th, 2014) and the new Flickr format. The old Flickr format image has buttons in French because that format is no longer available for English language users. 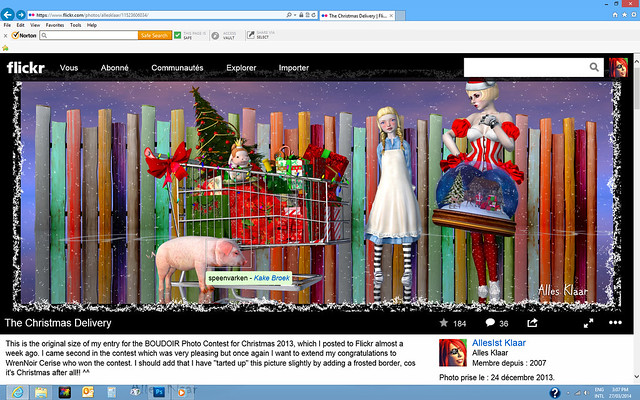 You can see on the image above that there is a note on this photograph which has been placed on the pig by Kake Broek. Notes are now hidden in the New Photo Experience as you can see from the screenshot of this same Flickr page below. 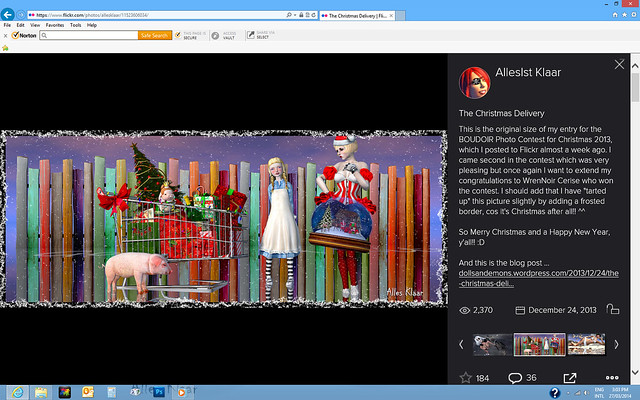 The image directly above is what the New Photo Experience looks like. As I have mentioned in my Flickr post it has only been rolled out to English speakers so far (or people who have set English as their language for Flickr). Feedback at the Flickr Help Forum suggests that apart from notes not being visible on the image there are a lot of other features that are either missing or “hidden” on the new photo page. For instance, you now have to click a button to see the tags on a picture which were clearly visible on the old photo page when you scrolled down a few centimetres. Or if you are like me and have let some group invites sit on your photos for a while, they have all disappeared in the new format as group invites will now only show up in Recent Activity … and as Recent Activity only caters for ten items, your group invites can disappear in a matter of hours or even minutes depending on how popular your picture has been as they get washed away by newer comments and favorites being added to your pictures.

Lastly, as one person at the Help Forum has noted:
“Comments squashed up the side of the photo is also something I hate … (it) gives them less importance … and of course is a direct copy of Facebook … not an original idea at all.”

My biggest complaint is about the black with reverse text. This is not reader friendly at all. It may be great for designing websites with little text, but on Flickr there is a lot of commenting and reading going on all the time. This page design is probably the offspring of a non-reader … because a reader would never design a page so anti-reading and unpleasant to the eye as this one. Who wants to read and write on a black page with text in reverse? Now if you want to write more than one or two lines, who is going to stay on your page long enough to read it on a black sidebar on the right side of the photo page that minimizes the importance of comments? With the new page design we have one more reason not to comment and to spend even less time on Flickr.

Flickr seems to be autodestructing because they don’t listen to reason. Wisdom is in the counsel of many. They would not listen, even though a Flickr team member, Satish Mummareddy, said that they “have incorporated a lot of the feedback you have been sharing with us and we believe that Flickr’s experience is ready to be the default experience for everyone”. Well, I’m not sure that they really pay that much attention to what we have to say. 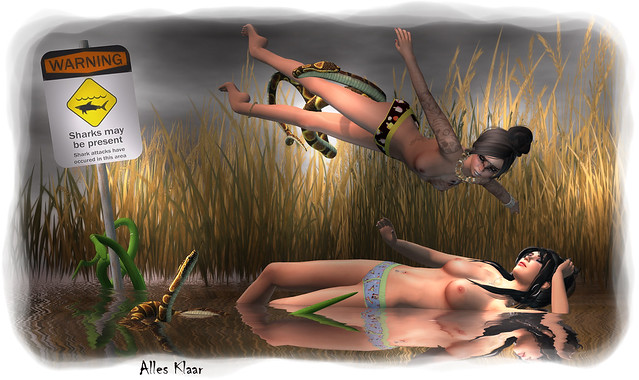 My friend Sugar Silverstar was in the midst of a vivid dream which somehow involved her lying down in shallow, snake-infested waters wearing nothing else but a pair of bright and colourful undies … and then I fell out of the sky to spoil it for her!! Oh dear, I am wicked!! ^^

! ellemeno ! undies – womens – atomic … made by CarrieAnn Lemon. They are a gacha item at the Luck of the Irish Gacha Fair (hosted by Depraved Nation) which runs until March 31st, 2014. There are 23 pairs available on this gacha and they are in both a men’s and women’s fit. At 50 lindens a play it’s a bargain way to get some colourful new “nether garments”!! NEW. http://maps.secondlife.com/secondlife/Metropolis/160/87/54

Serpent8 – Diesel Works … on me and in front