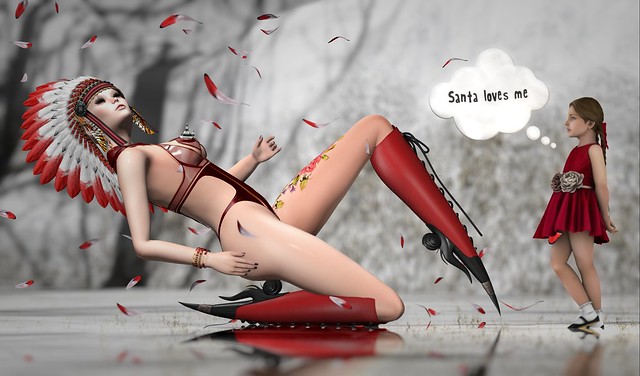 Cos I don’t want the girl in the red dress to get all of the attention, of course!! 😀

As for my worn details, the big girl on the left is kitted out this way.

*COCO*_FeatherHeaddress(Red)_Resize … made by cocoro Lemon. This was purchased at FaMESHed event in June 2015 but no longer seems to be available.

[Glam Affair] Ophelia Applier [ Lelutka ] 002 – 13 … made by aida Ewing.
This is a common prize on the Ophelia (skin) gacha machine at the current round of The Epiphany, which is open from November 29th to December 27th. NEW.
The Epiphany

AZOURY – Veuve Noire Red [Maitreya Lara] … made by Aniki Seetan.
This very spiky set of ballet shoes are available at the Christmas round of the fortnightly Cosmopolitan Event, which is open from December 17th through until December 29th. NEW.
Cosmopolitan Event