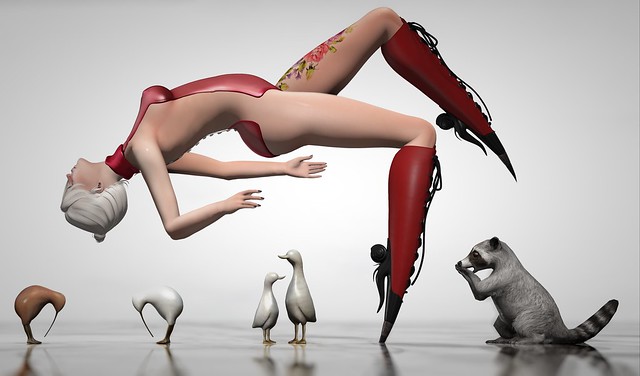 And why not, after all where I live in Real Life, December and January are referred to as the “silly season” – and for very good reasons too!! 😀

Tableau Vivant \\ Vanessa hair [scalp] … made by M4ri1yn Magic.
I’m wearing the short version of this hair in a tone from the Blonds pack – there is also a “ponies” add-on that you can wear as well. Vanessa is available at the latest round of KUSTOM9, which is open December 15th, 2018 to January 10th, 2019. NEW.
KUSTOM9

[Glam Affair] Ophelia Applier [ Lelutka ] 002 – 13 … made by aida Ewing.
This is a common prize on the Ophelia (skin) gacha machine at the current round of The Epiphany, which is open from November 29th to December 27th. NEW.
The Epiphany

Klaris Roses – Tattoo Applier [CAROL G] Maitreya … made by Carolina Gaelyth. Purchased at the previous round of Cosmopolitan, which finished on December 1st. NEW.

Pose is AP – Nairobi 1 but tilted at almost 90 degrees and then further modified.