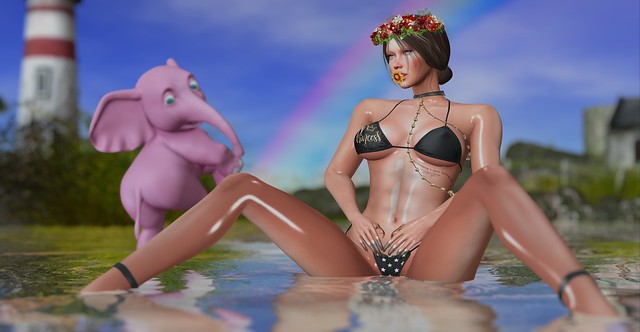 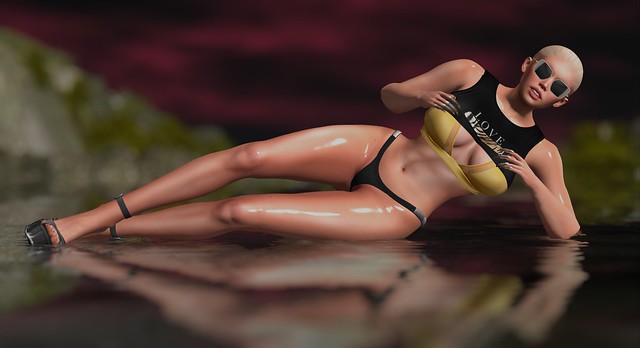 Actually I’m not even a Christian but I do have very fond memories of this song from when I was much, much younger.

Now as for my worn details in this picture, Alles is kitted out as follows.

GIZ SEORN: ‘Bri’ Crop Top [FatPack] Lara … made by Giz Seorn. Purchased at the latest round of the Cosmopolitan Event, which is open from May 16th through until May 28th. NEW.
Cosmopolitan Event

The pose that I have used is GP Sofia 2 … made by ElizabethNantesJewell Resident. 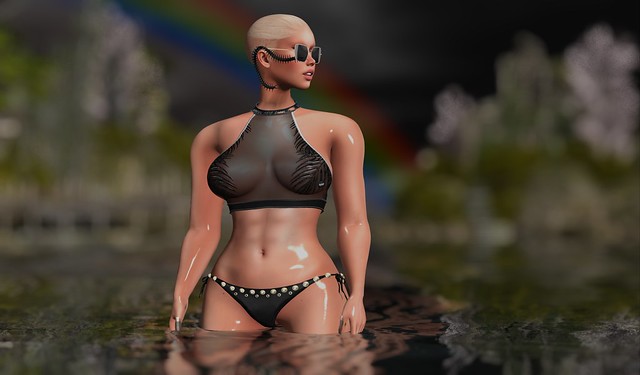 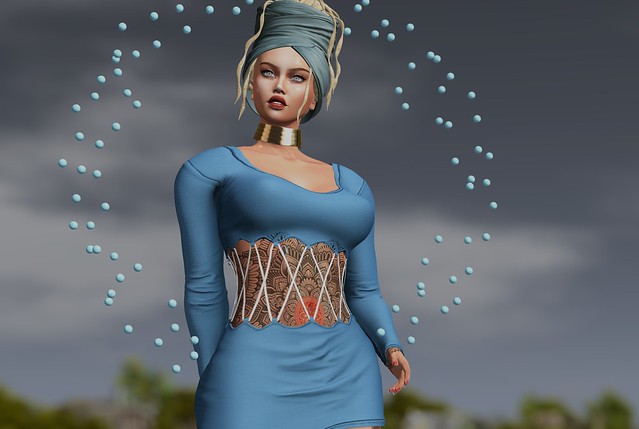 JustBECAUSE Dahlia Dress – FatPack (Lara) … made by Annie Melson.
The Dahlia dress is available in 18 colours – Alles is wearing the colour called 10Marine – and you can grab it now at the current round of FaMESHed, which is open from April 1st through until April 27th.
NEW.
FaMESHed 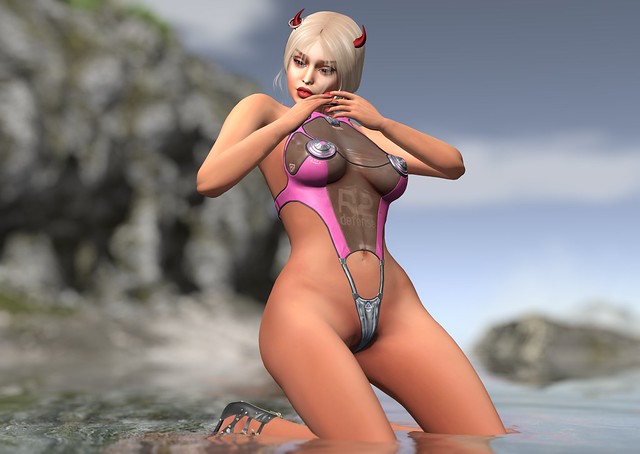 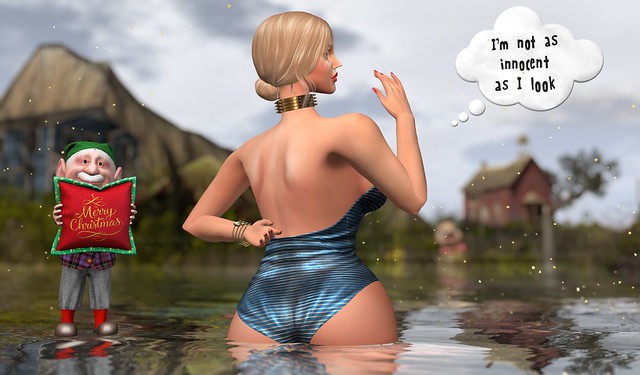 The pose that I have used is GingerFish Poses – Santa’s Baby1mirror … made by Tracy Redangel. 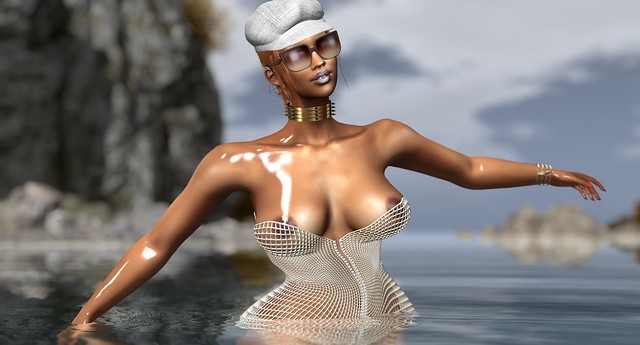 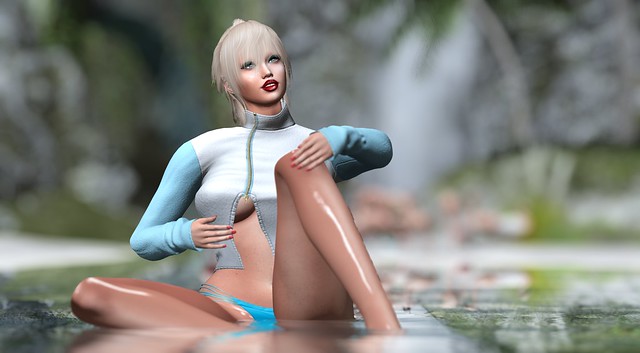 So, I’m on the beach at Tulum Reserve and this is what I am wearing, m’dears.

Tableau Vivant \\ Noct hair [female fit] … made by M4ri1yn Magic.
This is a short but kinda wild hair, which looks a bit like mine does in Real Life at present cos it’s been some months since I had it cut due to the Sydney lockdown. Noct is available now at the latest round of NEO-Japan, which is open from September 25th through until October 17th. NEW.
NEO-Japan

NANIKA – Blanca Panties Blue – Maitreya … made by NanikaCrimea Resident. This is the bottom half of the NANIKA – Blanca Bikini Blue, which I purchased as discount Happy Weekend item on July 18th. 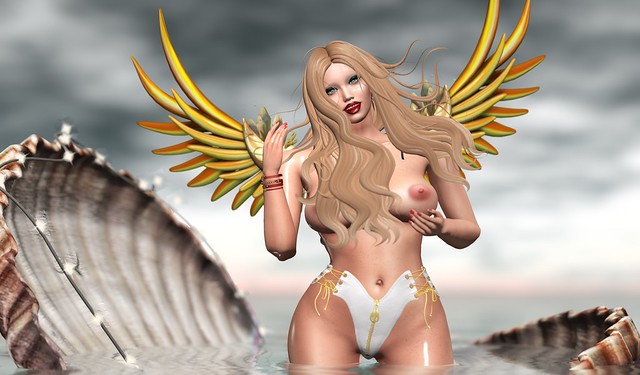 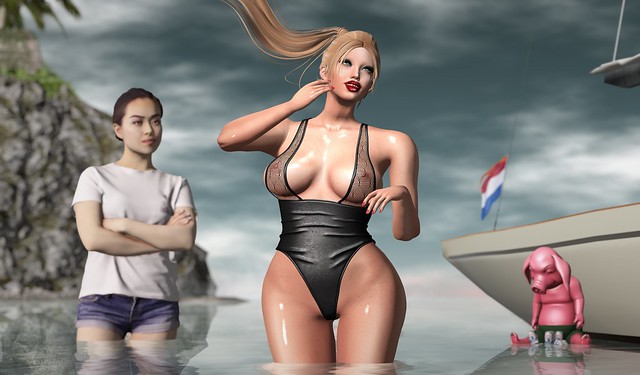 {le fil casse} Kayden Bodysuit Maitreya Black … made by Jacinda Jaxxon. Purchased at The Inithium Event, which is open from August 18th through until September 8th. So, hot foot it to this event before it closes its second round. NEW.
The Inithium Event

Mutresse – Wasted Pig … made by Eeky Cioc. Prior to September 1st, 2021 this was a common gacha item which had made it debut at The Arcade Gacha event back in March 2015 and was available since then on the Wacky Pigs gacha machine at the Mutresse store inworld. As gacha is now verboten in Second Life, you can now directly buy each one of the Wacky Pigs items or purchase the whole bunch as a FatPack. These items are all now COPY but not Transfer.
Wacky Pigs @ Mutresse

Shields Class v 2.0 … made by burt Artis. This is the boat behind me that the wasted pig is resting against but it’s actually part of the Tulum Reserve SIM decorations.

The pose that I have used is Secret Poses – Adorable 2 … made by SweetDaniellee Resident.