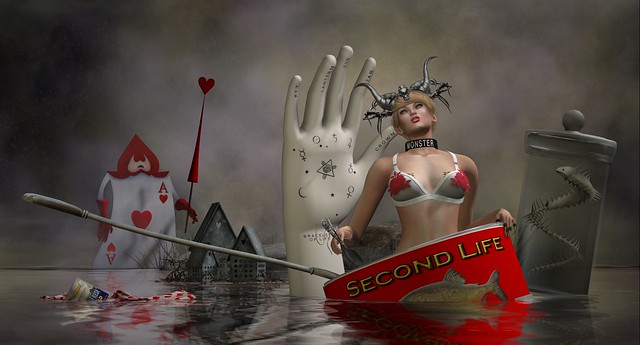 Actually you would have to be desperately hungry or be having some very odd pregnancy cravings to wish to be sitting inside a huge tin of black caviar and eating it up by the spoonful. Fortunately, I’m not feeling so inclined in Real Life!! 😀

tram G1207 hair (female) … made by moca Loup. I am wearing this short hair in a tone from the HUD-B pack. Purchased at the latest round of the Uber event, which is open from December 25th through until January 22nd, 2018. NEW.
Uber

Meva Bento Claw Left Hand Maitreya Gold … made by Mea Carnell.
The Meva Claws were first available at The Enchantment event in early 2016 but have now been updated as Meva Bento Claws and are available in fittings for both Maitreya and Vista bento hands – with individual finger fittings as well as full hands.
Meva Bento Claws @ Manifesto

.Shi Gift : Vintage Spoons … made by Joy Laperriere. I am holding them in my right hand. This was a gift at the August/September 2017 round of Shiny Shabby event.

Card Soldier-Heart … made by Precious Restless. This is part of a Wonderland set by Boudoir.

The Sleepy One – Pajama – Hearts … made by Kiddo Oh.

[ keke ] black caviar … made by Kean Kelly. Most of this large prop is underwater and I have made it much, much bigger than the original size of this décor item. Purchased at the latest round of the Shiny Shabby event, which is open from December 20th through until January 15th, 2018. NEW.

Piranha can (neko nip) … made by Chrom Snook. This is actually the paper label on the tin of black caviar, which otherwise would have been plain metal. Purchased on Second Life MarketPlace in December 2017.
Piranha tin (cat nip) *SnoWStylZ*

ROIRO – “L’annulaire” SB Fish scelton … made by roiro Resident. This is a gacha prize that I acquired (aka “won”) at the latest round of the Cosmopolitan Event, which is open from December 18th through until December 30th. NEW.
Cosmopolitan Event

And lastly, the pose that I have used is [X] Feline 2 … made by Xerys Resident.