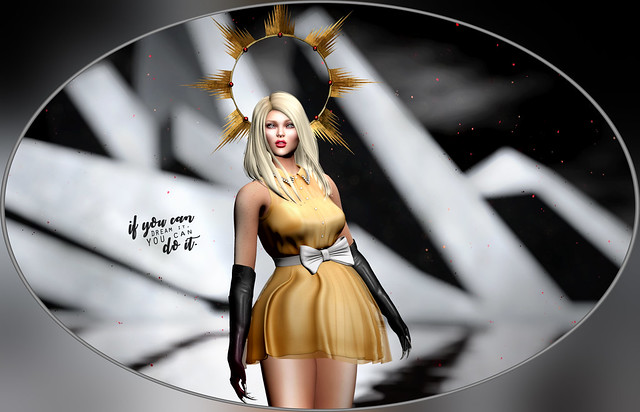 Well, now that I have got the obligatory Spandau Ballet reference out of the way, let’s see what Alles is wearing.

kosmii :: Icon Halo [gold] … made by Kera Sharkfin. Purchased at the latest round of Shiny Shabby, which is open from December 20th through until January 15th, 2018. NEW.
Shiny Shabby – [ k o s m ii ]

MINA Hair – Alexa … made by Mina Nakamura. I am wearing this straight hair in a tone from the Blonds pack. Available now at the current round of FaMESHed, which is open from December 1st through until December 27th. NEW.
FaMESHed

=Zenith=Spinning bow dress (Gold & Red) -Maitreya … made by Miffyhoi Rosca. Purchased at the current round of Collabor88, which is open from December 8th through until January 6th. NEW.
Collabor88

The backdrop in this shot is Skye Ice Sheets … made by Alex Bader.

The sole props that I used are as follows:

The pose that I have used is *PosESioN* Yeriak 7 … made by Dahriel Resident.