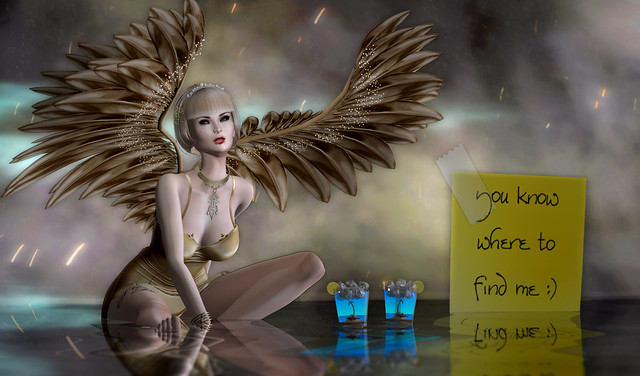 She crashed onto Planet Earth, went shopping at Collabor88 and discovered the joys of blue liquor from Schadenfreude … and the rest, as they say, was history!! 😀

Well perhaps that’s not quite the story but angelic Alles is wearing the following kit:

*JB* Heather Dress – Gold – Lara … made by Annie Melson. Purchased at the May/June 2017 round of Collabor88 – it also comes in a sheer version. NEW.

uK – Mystic Dew Mist Gold … made by Poe Rozenberg.
Purchased at the Whimsical event, which is open from May 18th until June 18th. NEW.
Whimsical

The pose that I have used is Bauhaus Movement – Music To Piss You OFF! 27 … made by LouLou Teichmann. However I altered this pose using my Animare HUD – in the head and neck department if you really want to know!