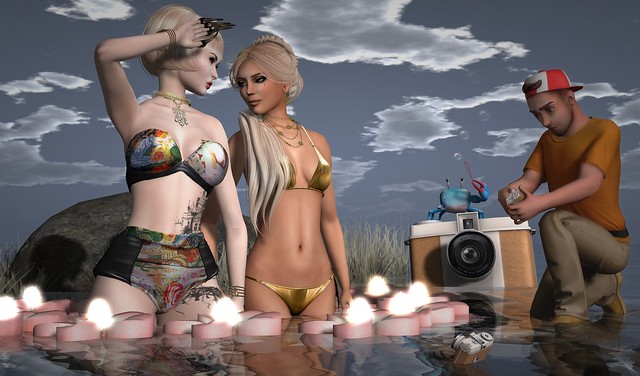 If you look very closely at this picture you will probably notice that Mr. FixIt actually has the small camera in his hands – pointed at himself! Oh dear!! 😦

Anyway, that issue aside these are our worn details.

Persefona Custom Add-ON – fireflies (gold) … made by Persefona Resident.
This item is part of the Persefona Anna Veil, which I purchased at the current round of the Cosmopolitan Event – open from June 5th to June 17th. NEW.
Cosmopolitan Event

SUGAR – on the right – is wearing the following:

~Tableau Vivant~ Cersei II – (S) – Blonds … made by M4ri1yn Magic.
This hair was originally available at We Love Role-Play in May 2015 but you can now find it in the Fantasy and Roleplay section of the Tableau Vivant store inworld.
Tableau Vivant – Cersei II

{what next} My Camera (texture-changing) x 3 … made by Winter Thorn. VERY SMALL

Mutresse-Power-Mr FixIt … made by Eeky Cioc.
This is a common prize for Mutresse at the June 2017 round of The Arcade Gacha. NEW.
The Arcade Shopping Guide – June 2017

The pose that we have used is PURPLE POSES – Friends 116 … made by Audrey Guter. However I rotated the pose balls (pose stars actually) so that we were both standing up rather than lying down as in the original.
This two-person pose is available both inworld at the Purple Pose store and here on the Second Life MarketPlace:
PURPLE POSES – Friends 116