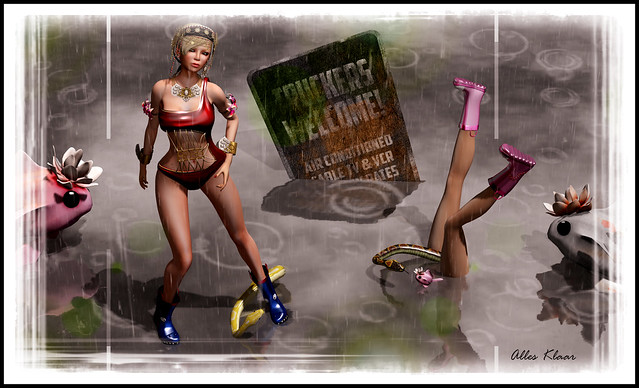 It has been wet in my Real Life (the wettest August in the city where I live for a quarter of a century) and er, wet in my Second Life too. Which is probably an apt time for me to be blogging these cute rain boots that will be on the Pure Poison booth when the September 2014 round of The Arcade Gacha opens.

Many thanks to my friend ookaminoko Resident who joined me for this picture and managed to hold her breath underwater for what must have seemed like an eternity!

Alles (in the red) is wearing the following:

. aisling . Tortuga Princess Headdress RARE … made by Damian Kleiner. This was a gift to me by my sweet friend RikkeBA Resident. NEW.

-LaViere- Eva/dirtyblonde hair … made by Azure Electricteeth. Purchased in January 2014.

Pure Poison – Crocs Boots – RARE … made by Shaleene Kenin. Available at the September 2014 round of The Arcade Gacha. NEW.

Pure Poison – pink mewos boots … made by Shaleene Kenin. Available at the September 2014 round of The Arcade Gacha. NEW.

The props that I used in this picture were:

7 – Truckers Welcome … made by Agustkov Resident. Purchased at The Arcade Gacha in March 2014.

+Half-Deer+ Flowerhead Goldfish – Love – Rez … made by Halogen Magic. It is the big fish on the left-hand side of the picture. Purchased in April 2014.

+Half-Deer+ Flowerhead Goldfish – Fancy – Rez … made by Halogen Magic. It is the big fish on the right-hand side of the picture. Purchased in April 2014.

+Half-Deer+ Flowerhead Goldfish – Love – Rez (S) … made by Halogen Magic. It is the small fish on the right-hand side of the picture. Purchased in April 2014.

Serpent8 – Diesel Works … made by Rogan Diesel. … next to me – (albino texture)

The pose that both Ooka and myself are using is MorPhinE – Dare … Set.1.3 … made by Hadulana Danes. I had loaded the pose into a stand and merely turned Ooka upside down and then hid the pose stand from view. I purchased this pose (as well as a swag of other Morphine poses) in February 2013.