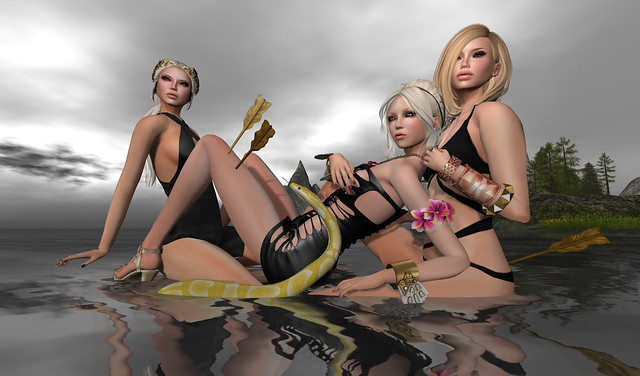 Firstly, I want to thank my two Down Under friends Elle and Mischa for being part of this picture at very short notice. I had recently bought the three-femme pose called Troika from oOo Studio and wanted to give it a test out but when I saw the three of us on the pose squares (they’re not balls!), I decided that we might as well do a picture then and there. 😀

Anyway, for starters this is what Alles (centre) is wearing:

Lamb. Pandora hair – light blondes … made by Lamb Bellic. Available now at the August 2014 round of Collabor88. NEW.

GizzA – No Escape! Outfit – Dress Size M … made by Giz Seorn. Cos I am wearing a mesh body I couldn’t wear the clothing layer items that go with this outfit so it’s nice and er, breezy if you will!! NEW.

DRIFT Flirty Panties [MESH] XS-Silk Swirl … made by Kallisto Destiny. Worn so I could maintain a bit of decorum in the scene, as I couldn’t wear the No Escape! panties.

Mischa on the right is wearing the following:

The pose we used is oOo Troika … made by Olaenka Chesnokov. oOo Studio is having a 50% off sale at their flagship store in Second Life through to August 31st.

4 thoughts on “Three Aussies at Sarawak”