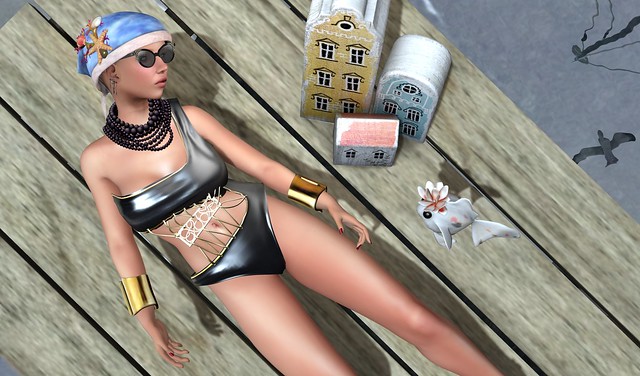 Today is July 27th, 2014 … which means that it’s the very last day of Hair Fair in Second Life. And because it’s Bandana Day, I’m wearing one of the six bandanas that I bought at Hair Fair on my Saturday night.

Anyway, this is what I am wearing:

Entice – Under the Sea Bandana … made by EnticeStore Resident. Available at Hair Fair – now – for just 50 lindens. NEW.

Glam Affair – Vintage Sunglasses Black … made by Amberly Boccaccio. Purchased in August 2013 at that month’s round of Collabor88.

GizzA – Sunshine Swimsuit [Favorite Solid] … made by Giz Seorn. Like all versions of the Sunshine Swimsuit, this also comes with a pareo and has a colour change HUD – although lazy me left it at black, cos it’s sexy. NEW.

+Half-Deer+ Flowerhead Goldfish – Fancy – Rez (S) … made by Halogen Magic. Purchased in April 2014, it is available instore at +Half-Deer+.

The pose I have used is Ma Vie. – Over my head 04, which is made by Mavi Beck. If you are quick you can get the complete Over My Head pose set at a bargain rate today only as it is a Lazy Sunday item at her store.

3 thoughts on “Rooms With A View”