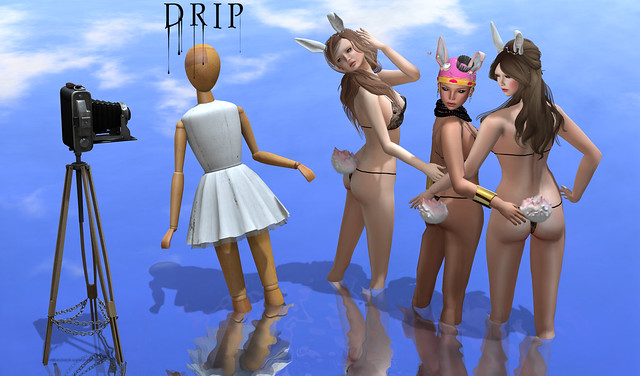 Fifty Linden Friday is fast becoming one of my favourite buying events in Second Life. And with the participation of many well-known Second Life retailers like Belleza, floorplan, Glam Affair, LISP Bazaar, Pure Poison, {vespertine} and { what next }, there are many bargains to be had. So when HALF DEER had a very recent sale on er, bunny tails, I just knew that I would have to grab them and rope in a couple of other people to be in the shot – which with YukaChoco and KIRIN wasn’t that hard.

So all three of us are wearing bunny tails as well as new lingerie from Chocolate Atelier, which just happens to be YukaChoco’s store in Second Life. It’s called Fragile love *Black* and as you can see it’s a bra and panties set.

Aside from that Alles is wearing the following:

The Rebakery with Zoeware’s Cuppiecake Princess Bandana 2014 … made by Jasmine0Alaya Resident. Available at Hair Fair – now – for just 50 lindens. NEW.

The pose we are using is KaTink – Summer Rhyme … made by AnneMarit Jarvinen. You can find the store location for KaTink in her Profile Picks.