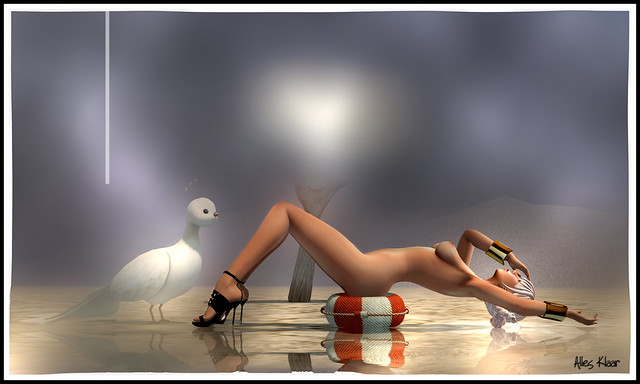 Or the title could be “It’s Too Darned Hot”, if you prefer. It’s just moi and a few bits and pieces at the Dryland SIM which – marvel of marvels – is still open for visitors.

And this is what I am wearing:

Hair – !Ohmai Salon: Newreem [w/Tweeter] … made by Anya Ohmai. Purchased at Hair Fair 2014 which is running through to July 27th. NEW.

Pure Poison – Dangerina Heels for SLINK Medium … made by Shaleene Kenin. Available now at the July 2014 round of The Liaison Collaborative. NEW.

Slink Nail Applier *Weather* [toe] … made by YukaChoco Magic. Available now at TGGS (The Gallery Gift Shop), for a 50% discount while the event runs. NEW. Follow the red carpet when you arrive at the Saikin landing point as TGGS has moved from its usual location as it is celebrating its third anniversary.

*MishMish* White Peacock – The Dazzle – stand1 … made by Aime Takaaki. Purchased at Collabor88 in August 2013 but I’m not sure if they are available any more.

Dita’s Grunge Lifebuoy … made by Dita Actor. I have modified this prop to make it thicker so it cushioned my tender derrière.

The pose I am using is [AM] Melancholia, which is made by Cestra Szimmer (cester.sabetha). I purchased it at her inworld store, Another Moon.

One thought on “Just One Tree”