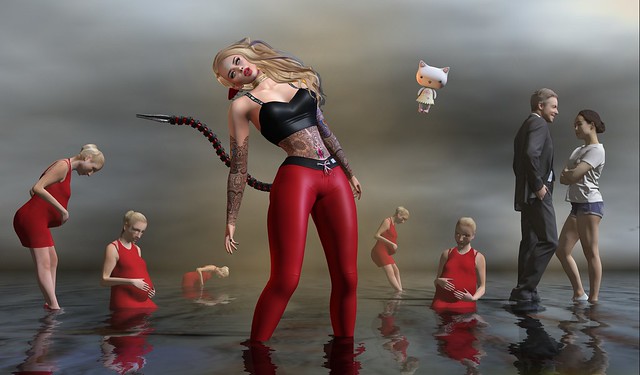 Although there must be dry land somewhere nearby … I bet!! 😀

Tableau Vivant \\ Damsel hair … made by M4ri1yn Magic. I am wearing this “distressed” hair in a tone from the Reds pack, although once again I have more of a strawberry blonde appearance than that of a true redhead. Damsel is available now at the current round of Collabor88, which is open from February 8th through until March 6th. NEW.
Collabor88

CODEX_OSYRIS CHOKER MAITREYA … made by animaldj Resident. Purchased as part of an Osyris set which also included two earrings at Shiny Shabby, back in August 2017. However, you can now buy the CODEX_OSYRIS set at Second Life MarketPlace.
CODEX_SET OSYRIS

Seniha. Janen Top // Maitreya // Black … made by Seniha88 Resident.
Purchased at the latest round of Uber, which is open from February 25th through until March 22nd. NEW.
Uber
OR
Uber Cam Shopping 1

Alma Tattoo Color [CAROL G] Maitreya … made by Carolina Gaelyth.
Purchased at the latest round of Uber, which is open from February 25th through until March 22nd. NEW.
Uber
OR
Uber Cam Shopping 1

Seniha. Janen Pant // Maitreya // FATPACK … made by Seniha88 Resident. Purchased at the latest round of Uber, which is open from February 25th through until March 22nd. NEW.
Uber
OR
Uber Cam Shopping 1

The pose that I have used is Le Poppycock-A text that’s all emojis … made by Olivia Lalonde. This is from a set called Le Poppycock *Sweet Stuff* B that I purchased in September 2017.