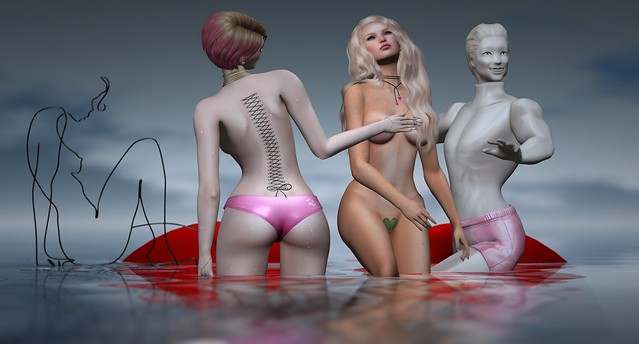 As performed by Alles, Lara (as Venus) and my new boyfriend, Alberto!! 😀

But for fashion details, please read on below.

MINA Hair – Lily [unrigged] … made by Mina Nakamura. This short hair is available now at latest round of Uber, which is open from August 25th to September 22nd. NEW.
Uber

**RE** Evva Body Piercing – Maitreya – Spine … made by crashnoww Resident. Purchased at the Fifth Anniversary round of FaMESHed in May 2017.

OSMIA – Night.Party.Panties – Maitreya – Pink … made by Gabby111996 Resident. Purchased at the Blush event, which is open from August 14th until August 28th. NEW.
Blush

LARA – in the middle – is wearing the following:

PILOT – Wire Woman 1 [Black] … made by Kaz Nayar. Purchased at the current anniversary round of Collabor88, which is open from August 8th until September 6th. NEW.
Collabor88

Meva Heart … made by Mea Carnell. I have made this prop considerably bigger than the original item but then left most of it submerged in the SIM water.

CURELESS[+] Plastic Boyfriend Albert / Escaping … made by Kaorinette Resident. Purchased at the current anniversary round of Collabor88, which is open from August 8th until September 6th. NEW.
Collabor88

We used two individual poses to make this picture. The pose that Alles used is Bauhaus Movement – Breaking The Habit 24 … made by LouLou Teichmann. However I tweaked this pose inworld by using my Animare HUD. The Bauhaus Movement – Breaking The Habit set of poses is available now at the latest round of The Liaison Collaborative event, which is open from August 7th until August 30th. NEW.
The Liaison Collaborative

The pose that Lara used is Natalie 04 … made by