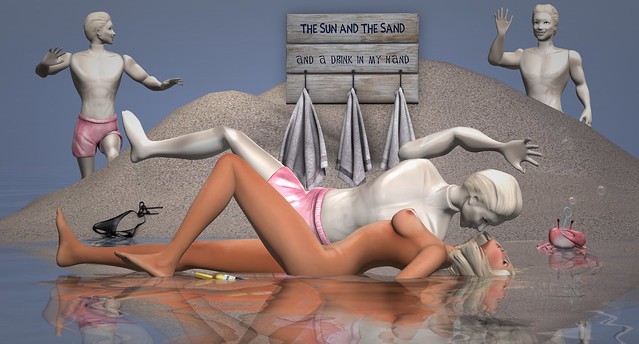 Or should I have called this blog piece “From Here to Modernity”? After all, this contemporary take was done more than sixty years after the original. 😀

Anyway, enough of my ramblings. Lara’s minimal fashion are as follows:

LB_BeachSand-v1{Low Li} … made by Cari McKeenan.
This is part of a LB_WhitePalms-FatPack{Animated} that I purchased at the May/June 2017 round of Shiny Shabby.

220ML – Chronos Beer [Bottle Open] [HAND] … made by Jonas Acanthus.
I rezzed this item next to Lara so it looked as if she had dropped it in the water.

And lastly, the pose that Lara used is Tabatha 06 … made by susi Firanelli. Purchased as part of a Tabatha 6-10 FatPack at On9 in August 2015 but now available instore at the AMITIE Pose Store.
Amitiè Poses