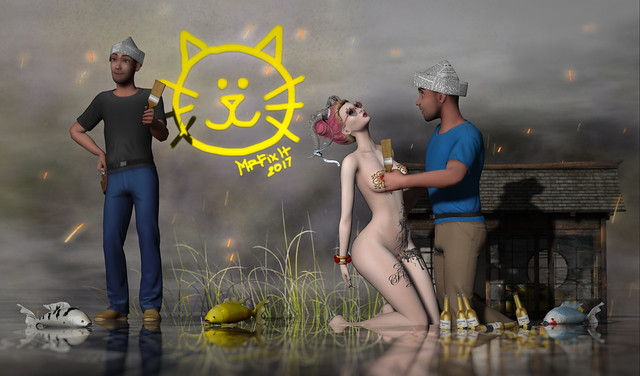 Well, if you can see four koi carp in this picture then you definitely don’t need your eyesight tested – punk!! 😀

As for my “fashion details”, Alles is wearing the following:

8f8 – Renaissance Horns – GLASS … made by 8f8 Resident.
These were first available at The Fantasy Collective in October 2014 but can now be purchased at the Black Kite store inworld.
8f8 Store at Black Kite SIM

MINA Hair – Marre (unrigged) … made by Mina Nakamura. I am wearing this hair in a tone from the Dip Dye pack. Available at the June 2017 round of FaMESHed, which begins on June 1st. NEW.

HAYSURIZA_Eyewear_Love heart(M siz) … made by Hays Uriza. Purchased at the May 2017 round of the On9 event, which finished on May 28th. NEW.

uK – Mystic Dew Mist Gold … made by Poe Rozenberg.
Purchased at the Whimsical event, which is open from May 18th until June 18th. NEW.
Whimsical

Mutresse-Artist-Mr FixIt … made by Eeky Cioc.
This is a common prize for Mutresse at the June 2017 round of The Arcade Gacha. NEW.
The Arcade Shopping Guide – June 2017

Mutresse-Clumsy-Mr FixIt … made by Eeky Cioc.
This is a common prize for Mutresse at the June 2017 round of The Arcade Gacha. NEW.
The Arcade Shopping Guide – June 2017

220ML – Chronos Beer [Bottle Open] – rezzed by me x 5 … made by Jonas Acanthus. This was a TCF group gift at the Fourth Anniversary round of The Chapter Four in May 2017. That round has closed now – I think? NEW.

The pose that I have used is Bauhaus Movement – Fade to Black 320 Kbps 32 … made by LouLou Teichmann.