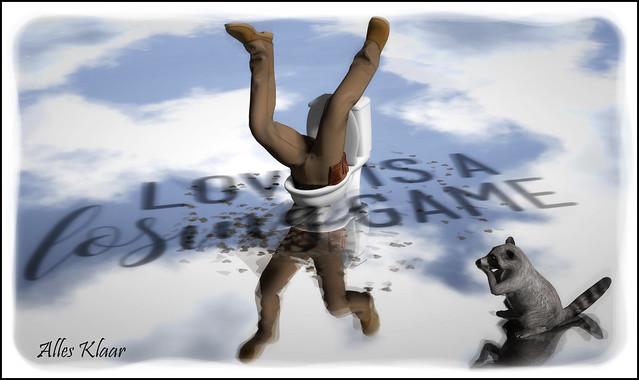 The Arcade Gacha event will return for its mid-year season on June 1st for a month-long session of compulsive spending. Well, by some of us anyway!

I’m not the greatest fan of gacha events but there are some Second Life creators who really do offer great value for lindens on each and every item on their prize list. One of these creators is Eeky Cioc from Mutresse, who has produced high quality and original goods for each of her many Arcade outings. And this June round is no exception.

Ready and waiting to be collected on June 1st is a set of quirky figures who come together under the collective title of Mr FixIt – or a Toolkit of Tradies if you prefer a more robust vernacular. Amongst the flailing tradesmen (and yes, they’re all men cos women can do a much better job) are figures called Artist (who is pleased with his stick picture of a cat), Clumsy, Sunk (our plumber) and the tradie in “heaven”, who is Wasted!! 😀

Mutresse-Sunk-Mr FixIt … made by Eeky Cioc.
This is a common prize for Mutresse at the June 2017 round of The Arcade Gacha. NEW.
The Arcade Shopping Guide – June 2017

Mutresse-Cheeky Raccoons-Gasping … made by Eeky Cioc. This was a gacha prize from the September 2015 round of The Arcade Gacha but you can still get members of the Raccoons set at Mutresse on an instore gacha machine.
Mutresse – Gacha Machines

+Half-Deer+ Heart Glitter – Gold A … made by Halogen Magic.

SAYO – Love Is A Losing Game Wall Text – Silver … made by Kaysha Piers. Purchased at the current round of KUSTOM9, which is open from May 15th until June 10th – and what I have used here is the shadow of the actual prop. NEW.
KUSTOM9