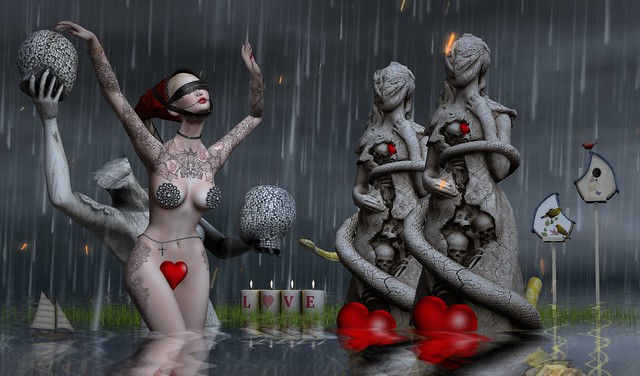 Cos a massacre on this day would never do!! 😀

[CURELESS+HEADACHE] Barbedwire Mask / SILVER … made by Kaorinette Resident. Purchased in May 2016 at that year’s round of The Dark Style Fair.

{what next} LOVE Candles Decor … made by Winter Thorn. This is available on Second Life MarketPlace as part of a set that also includes a mantle print.
{what next} Love Candles & Print

Meva Heart x 2 … made by Mea Carnell. These copy/modify objects are part of a Meva group gift that is available inworld now at the Meva mainstore. NEW.
Meva Valentines Day Gift

And lastly, the pose that I have used is Bauhaus Movement – Liquid Hater 38 … made by LouLou Teichmann. Purchased as part of a Liquid Hater pose set at the January 2017 round of The Liaison Collaborative. NEW.

One thought on “The Valentine’s Day Surrender”