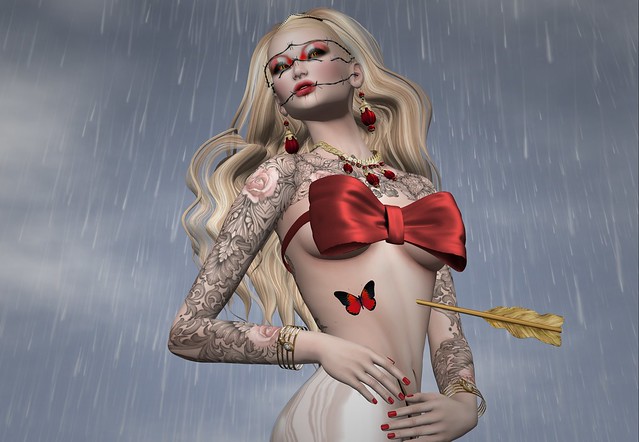 Is your figure less than Greek?
Is your mouth a little week?
When you open it to speak
Are you smart?

But don’t change your hair for me
Not if you care for me
Stay little valentine stay
Each day is Valentines day.

So if I’m your favourite work of art … then these are my worn details.

[CURELESS+HEADACHE] Barbedwire Mask / SILVER … made by Kaorinette Resident. Purchased in May 2016 at that year’s round of The Dark Style Fair.

[White~Widow] Loving – Pink – Maitreya Mesh Body … made by Julie Hastings.
I am wearing this tattoo on my upper body. Purchased at the Winter Trend 2016 event in December 2016.

Astralia – Sexy Valentine Bra MM (Maitreya) … made by Astralia Resident.
This is available as a Last Chance item on the Midnight Madness boards at the Astralia Mainstore until midnight on Sunday, February 12th SL time. NEW.
Astralia Mainstore

r2 A/D/E nanoha pants[sheer white]Maitreya … made by rei2 Aya. Available now at the current round of Collabor88, which is open from February 8th until March 6th. NEW.
Collabor88

The pose that I have used is Kirin – Summer Pose 1 … made by Carolina Sautereau. The Summer Pose set is available on Second Life MarketPlace.
.::Kirin Poses::. Summer Pack