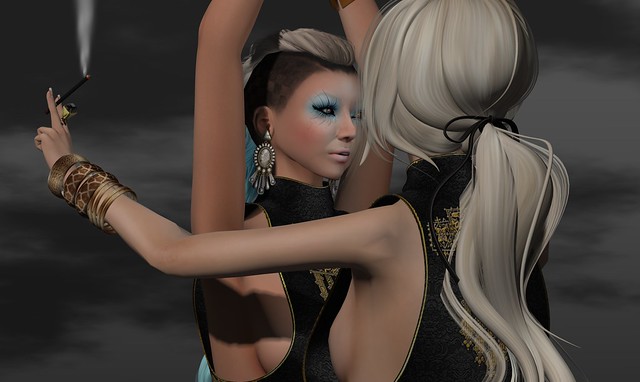 As I have noted recently on this blog, I have taken to wearing a very, very tall and willowy shape lately which puts me in the lofty company of people like Beatrice Serendipity and Lanjran Choce. So it has only been natural that I have done some pictures with them, of course!!

For my pictures with Lan, I did a “close-up” of our legs and then some head-and-shoulders and fuller body shots. As you can tell, this is a head-and-shoulders image, albeit with a bit of arms and er, boobs thrown in for good measure.

Both of us are wearing the top from the new and super sexy, GizzA – Macha Outfit, which is rather revealing in most departments – especially where the hips and thighs come into play. Thank goodness there is no wind in Second Life is all I can say!! ^^

Our other worn details are as follows:

Alles on the left is wearing:

~Tableau Vivant~ Viking Hair – Ladies … made by M4ri1yn Magic. I am wearing one of the tones from the Equinox fatpack.

DeeTaleZ shaved chess hairbase … made by Steffi Villota. Purchased on MarketPlace in July 2014.

Lan on the right is wearing:

The two-person pose that Lan and I are using is KaTink – No Escape … made by AnneMarit Jarvinen. This pose setup is actually for a male/female couple but I edited to make it work for us two femmes. For this image I just zoomed in on our upper torsos, of course. Available now at the KaTink mainstore in Second Life. NEW.

2 thoughts on “Smoking With Lan”