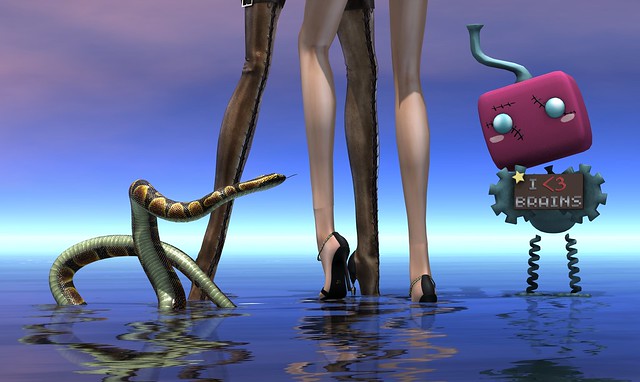 Alles in the covered legs is wearing:

Pure Poison – Steampunk Fitted Boots … made by Shaleene Kenin. Available now at the September round of The Liaison Collaborative which will be open until midnight on Friday, October 10th. NEW. More details on that monthly event here: http://www.liaisoncollaborative.com/2014/08/technologic-will-be-opening-september-15th/

Lan in the bare legs is wearing:

Serpent10 – Diesel Works … made by Rogan Diesel. Purchased as part of a set of ten snakes which have poses if you sit on them, in August 2013 at that month’s round of Collabor88. Available now on MarketPlace and inworld at the Diesel Works store.

{Zomberry army} Charlotte .::Cubic Cherry Kre-ations::. … made by Kreao Kujisawa. Available now as part of a set of mega-cute figures which constitute the Zomberry army at the Level Up sales event, which this quarter has a Survival/Horror theme. NEW.

The two-person pose that Lan and I are using is KaTink – No Escape … made by AnneMarit Jarvinen. This pose setup is actually for a male/female couple but I edited to make it work for us two femmes. I also just zoomed in on our legs, of course. Available now at the KaTink mainstore in Second Life. NEW.