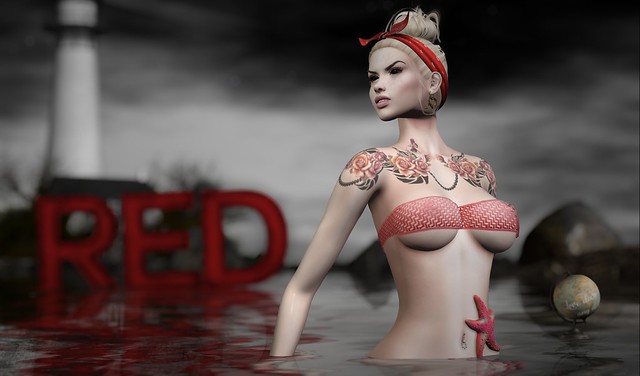 DOUX – Luxy Hairstyle [UNRIGGED] … made by Dam1710 Resident.
I am wearing this updo with a headscarf in a tone from the Blondes pack. Purchased at the Good Vibes Fair, which is open until June 29th. NEW.
Good Vibes Fair

UC_Long_lace_top_pink_Maitreya … made by unitedcolorsteam Resident.
The Long Lace Top has a HUD which enables you to toggle off the fringing lace, which is what Alles has done here to leave only the bandeau top showing. Available now at the latest round of the Kink(Y) Event, which is open from June 28th through until July 19th. NEW.
Kink(Y) Event

Scandalize.Melissa-STAR-WAIST. Maitreya … made by Yanikka Resident.
This is part of the Melissa bikini outfit which I purchased at the Good Vibes Fair, which is open until June 29th. NEW.
Good Vibes Fair

AF Industry Letters – linked to spell ‘RED’ and then tinted red as well.

The pose that I have used is *D* Boudoir Rouge – Lay me – Red Hawt … made by Alexx Markova. However this is one of a set of Boudoir Rouge poses that I had loaded into a pose stand, which I then titled at 90 degrees so that I was “standing” vertical rather than lying horizontal. I bought the Boudoir Rouge poses in April 2008 but they are no longer available as the creator has left Second Life.