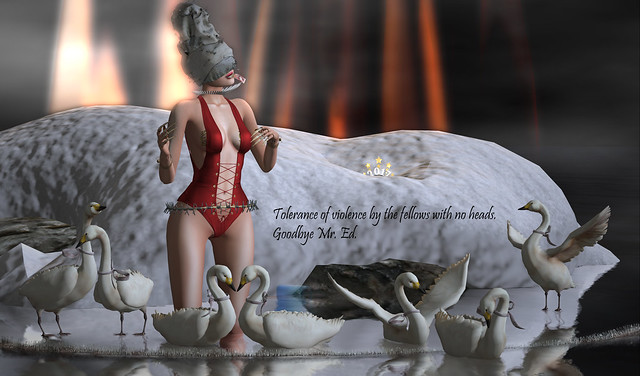 AZOURY – Hill Headwear [White] … made by Aniki Seetan. NEW.
(This item will be available at The Crossroads event which starts on January 3rd).

{ViSion} -S&F *Bodysuit Felisity [Maitreya Lara] … made by pjey Pearl.
This was purchased at the Cosmopolitan Event in October 2016 but it is now available on Second Life Marketplace.
ViSion-SF-Bodysuit-Felisity-Red

Kaithleen’s Barbed Wire Choker for HER … made by Zlyskritek Resident. This is a Copy/Modify wearable and so I enlarged it greatly and then attached it to my stomach so I could wear it as a spiky waistband. Originally purchased at the Cosmopolitan Event in October 2016.

Soy. A Snow Covered Cliff [Flat] for large use … made by Soyoy Resident.

And lastly, the pose that I have used is Bauhaus Movement – Dee … made by LouLou Teichmann.

One thought on “Someone Sees It All”