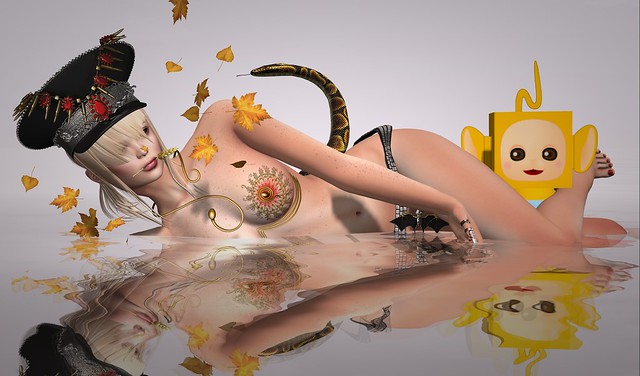 .Shi Hair : Quixotic / Unisex . LBlonde … made by Joy Laperriere. Purchased at the August/September round of Uber, which finished on September 22nd. NEW.

Persefona Wheat in mouth (gold) … made by Persefona Resident. Purchased at the current round of the Cosmopolitan event, which is open from September 12th until September 24th. NEW.
Cosmopolitan Event

StrawberrySingh.com – Indira Shape S Standard Size … made by Strawberry Singh. Modified by me – the hands are set at 10, my shoulders are at 70, breasts are 52, hip width is 65 and my belly is rather flat. Purchased on MarketPlace in July 2015.

PH – Lumoojatar – Necklace Gold … made by Irina Strazytski.
The Lumoojatar necklace was a common item for Poet’s Heart at The Fantasy Gacha Carnival, which finished on September 7th. NEW.
Update: they are now available on a gacha machine instore at Poet’s Heart.
Poet’s Heart Mainstore

Serpent8 – Diesel Works … made by

The pose that I used is Bauhaus Movement – Shiina … made by LouLou Teichmann. However this pose was modified by me using my Animare HUD, with the position of my left arm being changed.