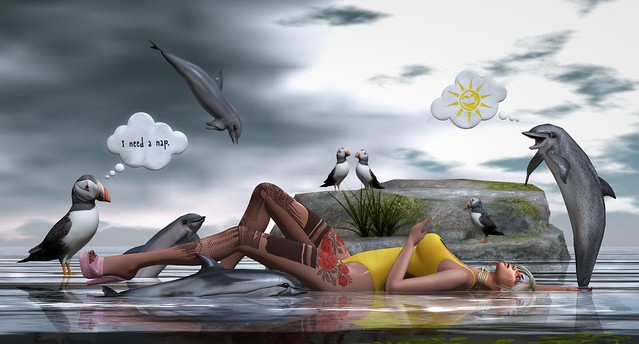 MINA Hair – Sigrid (Unrigged) … made by Mina Nakamura. I am wearing this hair in a tone from the Dip Dye pack. Sigrid was first available at the 6th Anniversary round of FaMESHed in May 2018 but can now be purchased at the main store inworld.
Sigrid @ MINA Hair

TLC Puffin … made by TLCHomeCollection Resident.

[ free bird ] Stoner Thought Bubble – I need a nap … made by Cortez Brandriss.

TLC Puffin Island Set – REZZ ME … made by TLCHomeCollection Resident.

Pose is [evoLove] Salacious7M … but this has been considerably modified by me as my legs are now stretched out flat rather then being kicked up in the air. 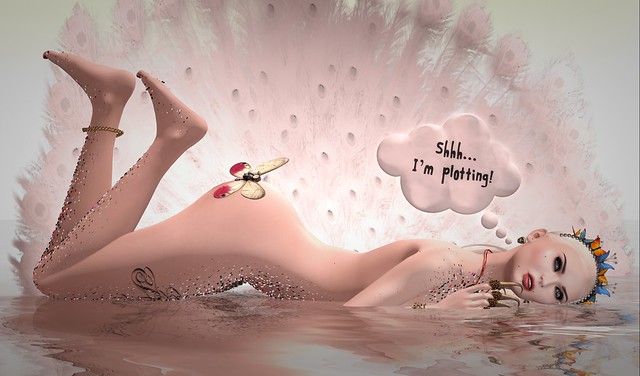 Will you give me … something elusive and temporary?

As for my trippy fashion details, Alles is wearing the following:

Meva Butterfly Headdress … made by Mea Carnell. This is part of a gacha set that was first available at The Gacha Garden in May 2016 but is now available instore.
Meva Butterfly Gacha @ Gacha Room, Meva Main Store (Manifesto)

TLC Male White Peacock Tail Up* … made by Lautlos Resident.
This is part of a two-item TLC White Peacocks* set that I purchased at the most recent round of the Cosmopolitan Event, which finished on June 17th. NEW.

[LWL] Charged-up Butterfly … made by Faint Paulse. This is part of an Insect Collection that was first available at The Arcade Gacha in 2013 but is now available instore at the Ladies Who Lunch HQ. And it’s just 25 lindens per play – great value.
[LWL] Gacha Machines @ Giacometti

And lastly, the pose that I have used is {NR} Pin Me Up 1 … made by Foxx Pawpad. However this pose has been considerably altered via use of my Animare HUD. You can purchases poses from the Pin Me Up series at the Vintage Fair 2017 event, which is open from June 9th to June 25th. NEW.