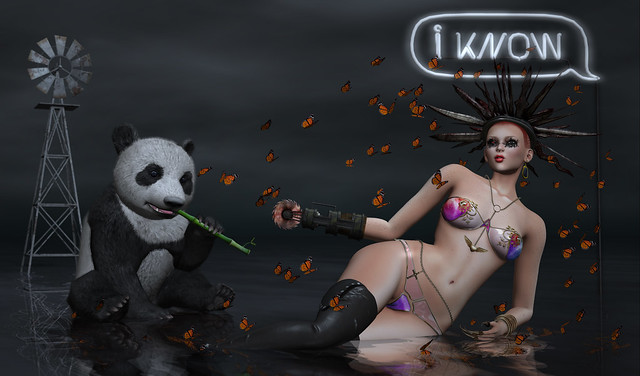 Which is the story of a panda cub and a girl in plastic lingerie – naturally!! 😀

As for my fashion apparel, Alles is wearing this totally amazing kit.

The Half Moon Market – Crown of Blades – Bloody … made by Heloise Ghostaltar. Purchased at the Remnant Dark Days event, which is open from November 17th through until December 8th.
Remnant Dark Days

MINA hairbase HUD – Angel Tattoo – Omega … made by Mina Nakamura.
The Angel hair and an accompanying hairbase (which I am wearing) is available at the Remnant Dark Days event, which is open from November 17th through until December 8th. NEW.
Remnant Dark Days

[ht:apparel] the amputator – sm RIGHT … made by Corvus Szpiegel.
I purchased the “amputator” (my limb which is a buzzsaw prosthesis – egads!) at the Remnant Dark Days event, which is open November 17th until December 8th. NEW.
Remnant Dark Days

Mutresse-Panda Bamboo-Bear Cubs … made by Eeky Cioc. This item was initially available at the March 2016 round of The Arcade Gacha but you can try your luck to get it – and others like it – on the Bear Cubs gacha machine at the Mutresse store.
Mutresse Gacha Machines inworld

Persefona All in Butterflies -move- (orange) … made by Persefona Resident.

Kalopsia – Neon Talk – I know … made by Isabeau Baragula.

And lastly, the pose that I have used is Bauhaus Movement – Shadows Bliss 24 … made by LouLou Teichmann. This is part of a Shadows Bliss set that I bought at the October 2017 round of The Liaison Collaborative. NEW.