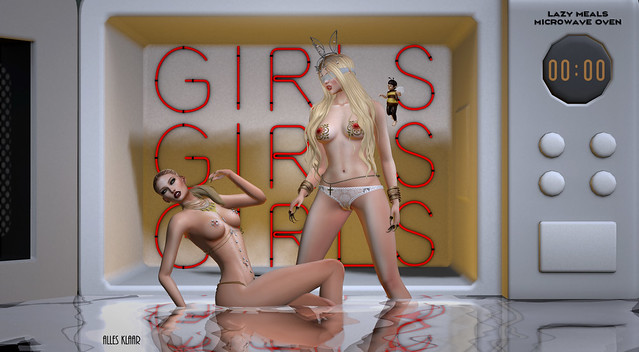 OPALE – on the left – is wearing the following:

MINA Hair – Eden … made by Mina Nakamura. Alles is wearing this long, flowing hair in a tone from the Blonds pack. Note: the Eden hair also includes the blindfold. Available now at the Kink(Y) Event, which is open from November 28th through until December 19th. NEW.
Kink(Y) Event

Effie Thong – White … made by Kiddo Oh. Purchased at the Dead Dollz mainstore on November 26th, 2017 which was the last day of the Dead Dollz Black Friday sale.

We used two single poses to make this sweet picture of us. The pose that Opale used is Ma Vie – Pure Heat 10 m … made by Mavi Beck, while the pose that Alles used is an lar [poses] The All That Series – Four. 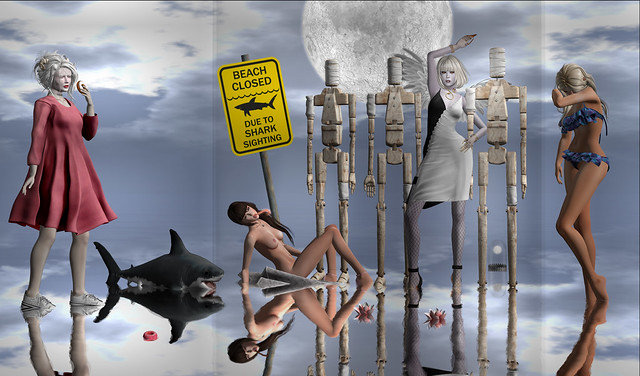 Did you know that there was a “supermoon” last week – or to be more specific, on November 14th? I did but because of heavy cloud cover in Sydney, I didn’t get to see it. So having missed out on a supermoon in Real Life, I decided to replicate an even bigger “super” moon in my Second Life. And I did it with a little bit of help from three of my friends!! 😀

But as this is a blog post, you don’t want to hear any more ramblings from me about astronomy. So without any further ado, read on below for our fashion details.

RAINBOW – on the far left of the picture – is wearing:

[monso] My Hair – Crowe /Black&White … made by Morphine Janick. Available now at the current round of Uber, which is open until November 22nd. NEW.
Uber

DORA – who is second from the left – is wearing:

ALLES – who is second from the right – is wearing:

*ARGRACE* IROHA hair … made by rika Oyen. I am wearing this short hair in a tone from the Whites pack. This hair has only recently arrived at the *ARGRACE* store inworld, however I purchased mine on Second Life MarketPlace. NEW.
Argrace-Iroha-Whites

UC_Celina_dress_black_Maitreya … made by unitedcolorsteam Resident. This is available now at the current round of KUSTOM9, which is open from November 15th until December 10th. NEW.
KUSTOM9

WREN – on the far right of the picture – is wearing:

The individual poses that we used to make this picture are as follows.
Rainbow: Pose It-A Spring Walk … made by Sirenity Soon.
Dora: Bauhaus Movement – Ayuzawa … made by LouLou Teichmann.
Alles: KwK.poses -attitude- 044 … made by kiana Jarman. Tweaked – left arm/hand moved a bit in Animare.
WrenNoir: DM – Driftwood (variant) … made by Del May. 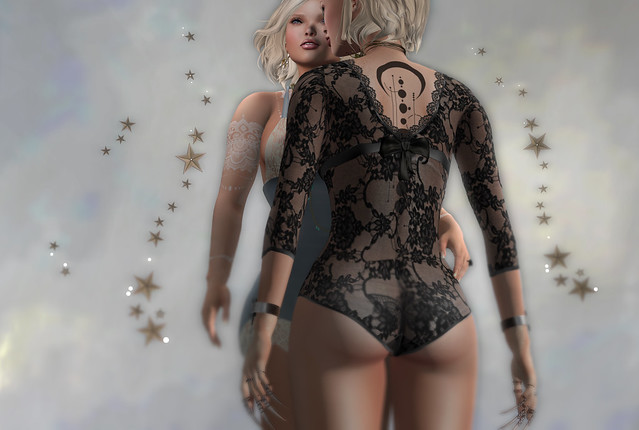 Who us? Well, perhaps it has something to do with the name of the two femmes pose that we are using!! 😀

As for fashion details, read on below.

MISCHA – on the left – is wearing:

Tableau Vivant \\ Biraz hair … made by M4ri1yn Magic. Available now at the current round of KUSTOM9, which is open from July 15th until August 10th. NEW.
KUSTOM9

ALLES – on the right and with her butt to the camera – is wearing:

Tableau Vivant \\ Biraz hair … made by M4ri1yn Magic. I am wearing this hair in a tone from the Basics pack. Available now at the current round of KUSTOM9, which is open from July 15th until August 10th. NEW.
KUSTOM9

The two person pose that we have used is Glamrus . Dangerous Woman … made by GlamRus Resident. Purchased at the current round of The Dressing Room, which is open from July 16th until July 30th. NEW.
The Dressing Room