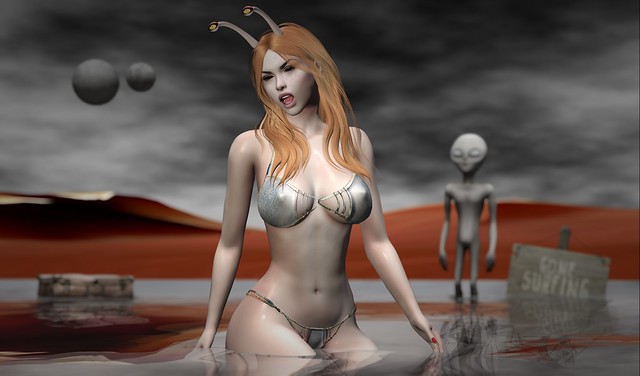 Cos I wouldn’t want to go nude with that creepy grey alien hanging around behind me – would I?

Tableau Vivant \\ Charlize … made by M4ri1yn Magic. I am wearing this hair in a tone from the Reds pack. Charlize is available now at the latest round of Collabor88, which is open from June 8th through until July 6th. NEW.
Collabor88

Baiastice_Panay Bikini-All Colors-UPPER-Maitreya … made by Sissy Pessoa.
Baiastice_Panay Bikini-All Colors-LOWER-Maitreya … made by Sissy Pessoa.
I am wearing this gorgeous bikini in one of the colours that is only available with the Fatpack purchase. Panay is available now at the “Beach Body Edition” of the latest Frou Frou event, which is open from June 10th until July 8th. NEW.
Frou Frou

Nutmeg. Old Suitcases Pink … made by NevaCrystall Resident. Purchased at the current round of Shiny Shabby, which is open from May 20th until June 15th. NEW.
Shiny Shabby – Nutmeg.

The pose that I have used is Bauhaus Movement – Hearts Burst Into Fire 38 … made by LouLou Teichmann. However I altered this pose inworld by using my Animare HUD to slightly change the position of my legs.