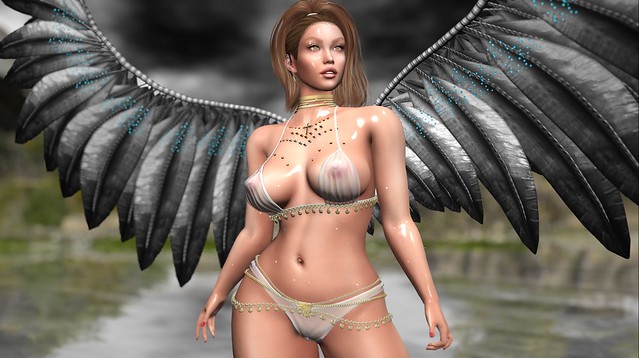 Well, to my Second Life of course!! 😀

Now as for my worn details in total, please read on below.

Tableau Vivant – Blush Add-on … made by M4ri1yn Magic. The Blush Add-on plus a LeLutka EvoX Hairbase 08 – which I’m not wearing because my LeLutka head is still waiting for its EvoX update – is available now at the very latest round of the Kink(Y) Event, which is open from April 28th through until May 22nd. NEW.
Kinky Monthly

#ADORED puffy nipples … made by Ampersand Artful.
Purchased as a discounted Happy Weekend item in November 2020. 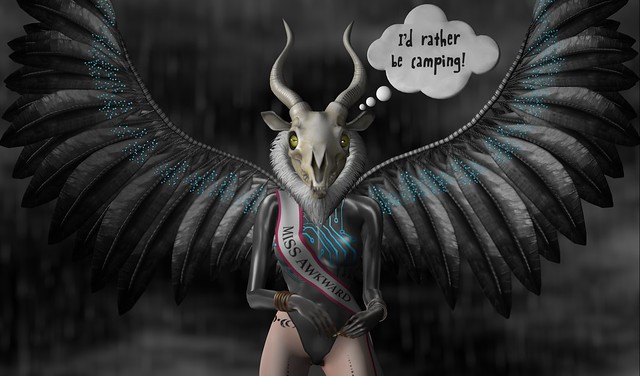 I’m not allowed to say who this lovely angel is but this is what she is wearing:

{MB} Beast Goat Skull (White Bearded) … made by MelonBunny Resident. Purchased at the One Word event in March 2015.

Dead Dollz Pageant Sash – Miss Awkward … made by Kiddo Oh. This is a common prize on the Dead Dollz gacha at the latest round of The Epiphany event. NEW.
The Epiphany

The props that have been used are as follows:

[ free bird ] Summer Thought Bubble – I’d Rather Be Camping! … made by Cortez Brandriss.

The pose that has been used is Pose is DM – Reluctance to walk … by Del May.