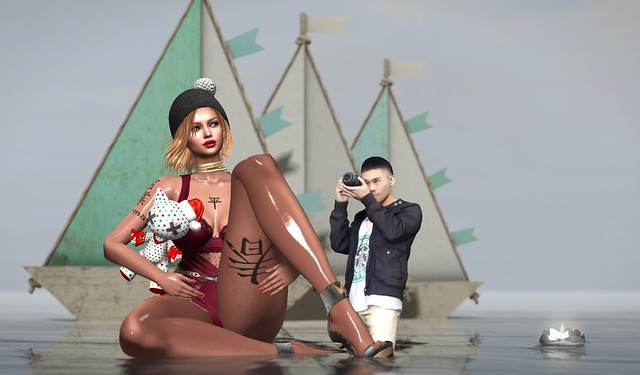 So … why has Alles gone “puffy”? Well, read on below and you will find out in my worn details.

Tableau Vivant \\ Puffy hair [windy] … made by M4ri1yn Magic. I am wearing this short hair with a pom-pom adorned beanie on top in a tone from the Fades pack. The Puffy hair – which also features a non-windy version – is available now at the latest round of Uber, which is open from November 25th until December 22nd. NEW.
Uber
OR
~Uber~ Cam Shopping @ Harajuku

NANIKA – Keya Bodysuit Maroon – Maitreya … made by NanikaCrimea Resident. Purchased as a discount item via The Saturday Sale on November 8th, 2020.

[ zerkalo ] Like a Bird – Flower Candle Light … made by ZerkaloDesigner Resident.

The pose that I have used is [ west end ] Bento Poses – Love Kitty – 06 … made by Beloved Ruby. However this was edited inworld by using my Animare HUD. 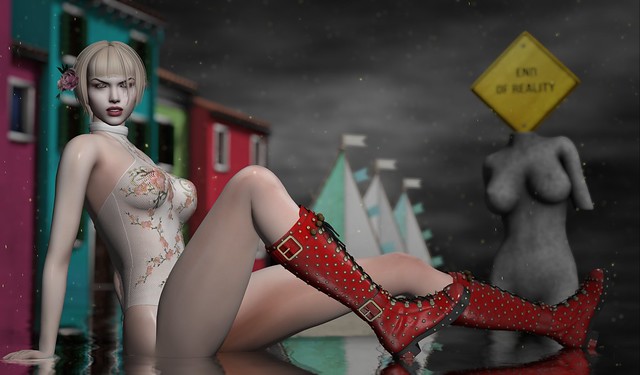 So, for all of my non-Deutsch followers, this is how Alles is kitted out today.

AZOURY Junon Boot Red {Maitreya – Lara} … made by Aniki Seetan.
The Junon boots are available now at the current round of the Cosmopolitan Event, which is open from April 23rd until May 5th. NEW.
Cosmopolitan Event

Paparazzi – Burano Italy – BACKDROP … made by Drew Sunflower. Purchased at the latest round of Shiny Shabby, which is open from April 20th until May 15th. NEW.
Shiny Shabby – Paparazzi

Sequel – Crafty Sailboats – Set … made by Fallacy DeCuir.
Originally purchased at the Cosmopolitan Event in mid-2016 but they may no longer be available. The profile for Fallacy DeCuir says the following in regard to Sequel:
“I currently only sell Sequel items at events, and therefore don’t have a mainstore location. If you’d like to purchase something, send me an IM and I’ll sell to you directly. Thank you! 😀” 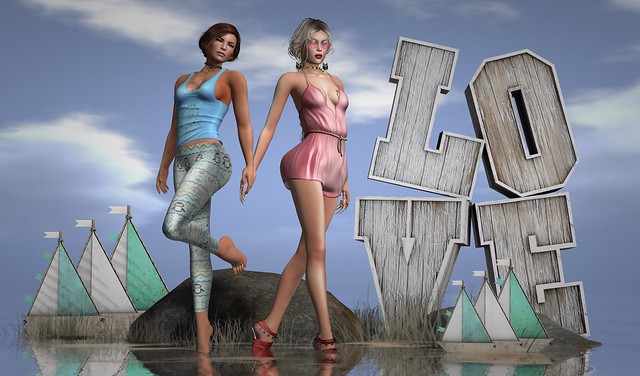 Ever since the American election of November 8th there has been a dark shadow hovering over our precious planet – the shadow of ignorance, bigotry and hatred that has been spawned in the wake of Tronald Dump’s election campaign. Which is why an event like #unitedandkind is so important – as it allows people in Second Life to financially support those organisations that will be threatened by the incoming Trump presidency.

Many thanks to my friend Wiwi Swot for being part of this picture with me. Our fashion details are below.

WIWI – on the left – is wearing the following:

#unitedandkind tank Maitreya Sky Blue … made by Jacinda Jaxxon. This cute top is available now at the United and Kind event. NEW.
#unitedandkind

tram F1120 hair(L) … made by moca Loup. I am wearing this hair in a tone from HUD-B. NEW.
tram Mainstore

Luas Julia Romper Maitreya Pink … made by AinaraLuas Resident. This gorgeous item is available now at the United and Kind event. NEW.
#unitedandkind

AZOURY – Nymphas High heels Shoes [Red] Maitreya REWARD … made by Aniki Seetan. The Nymphas high heels are available as a REWARD prize on the AZOURY vendor at the latest (December 2016) round of The Arcade Gacha. NEW.
The Arcade
and
The Arcade 2

Kalopsia – LOVE … made by Isabeau Baragula. I have made this Copy/Modify object considerably larger than the default size. Available now at the United and Kind event. NEW.
#unitedandkind 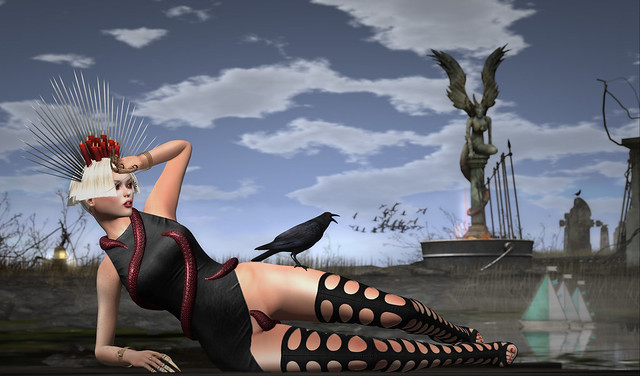 SAYO – Illuminati Crown – Silver Metal … made by Kaysha Piers. Purchased at the inaugural round of Memento Mori in October 2016. NEW.

.Shi : Ethereal . LBlonde hair … made by Joy Laperriere. Purchased at the May/June round of Uber but this hair is available instore now.
.Shi Flagship

UC_Eva_dress_all in 1_Maitreya_Lara … made by unitedcolorsteam Resident. Available now at the current round of the Cosmopolitan Event, which is open from October 24th until November 5th. NEW.
Cosmopolitan Event

Sweet Thing. Tentacle Embrace – Red – Maitreya … made by AyaShula Resident. Purchased at the recent round of the ROMP event, which finished on October 29th. NEW.

And lastly, the pose I have used is double take: french girls … made by Valena Vacano.
double take @ The Pea 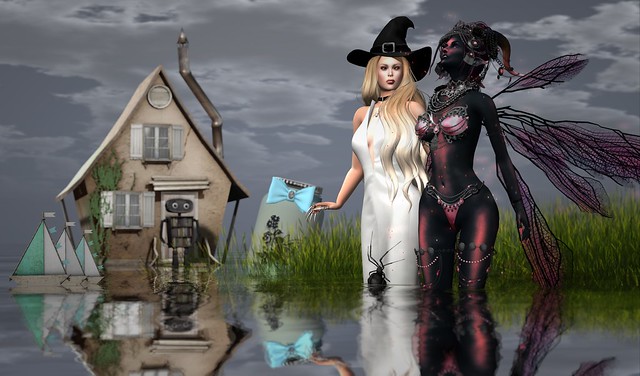 According to Wikipedia, in Chinese philosophy, yin and yang (also yin-yang or yin yang, “dark—bright”) describe how seemingly opposite or contrary forces may actually be complementary, interconnected, and interdependent in the natural world, and how they may give rise to each other as they interrelate to one another. Many tangible dualities (such as light and dark, fire and water, expanding and contracting) are thought of as physical manifestations of the duality symbolized by yin and yang.

So when Alles was wearing white and Tamzin was decked out in a darker shade of purple, the yin and yang concept sprang readily to mind.

Tableau Vivant \\ Blair II hair + hat [S] … made by M4ri1yn Magic. I am wearing the hair in a tone from the Ombre pack. The Blair hair + hat is available now at the Macabre Market on the Salem SIM from October 1st until October 31st. NEW.

TuTy’s Sarah shape … made by Tutys Resident. Purchased in September 2016 because I wanted a change from my StrawberrySingh.com shape. This shape has been modified by me so I have wider shoulders and hips and larger breasts at 55!

GizzA – Natalie Outfit – Patent Leather – Big Spider … worn on my dress. The spider is a add-on for this special edition of the Natalie Outfit, which was available at the On9 event in October 2015.

TAMZIN – on the right – is wearing:

Sequel – Crafty Sailboats – Set … made by Fallacy DeCuir. This was purchased at the mid-year (June 20th to July 2nd, 2016) round of the Cosmopolitan event.

dust bunny . fairy house . brown … purchased on a 25 linden per play gacha machine at the recent autumn sale at the Dust Bunny Mainstore, which was open from September 21st until September 26th.

Alouette – Dewey The Robot – Rusted … made by the late Scarlet Chandrayaan.
http://amyslegacy.blogspot.com.au/
Scarlet’s store is still open in Second Life and you can buy her products there.
Alouette Home & Garden 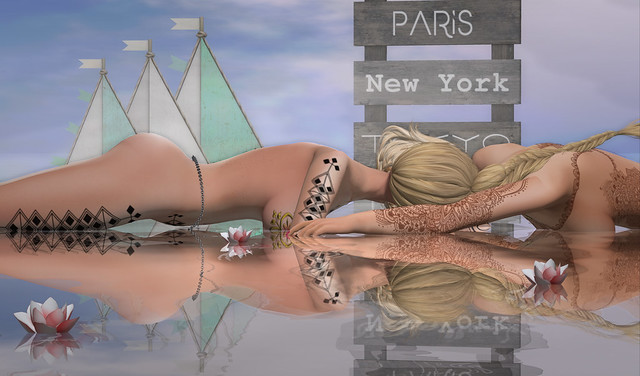 [monso] My Hair – Miyo /Blonde … made by Morphine Janick. Purchased at the July/August round of KUSTOM9, which finished on August 10th. NEW.

Sequel – Crafty Sailboats – Set … made by Fallacy DeCuir. Purchased at the mid-year (June 20th to July 2nd) round of the Cosmopolitan event.

[Cb] Travel Wall Art … made by Chic Aeon. Purchased at the current round of the Très Chic event, which is open from August 17th until September 5th. NEW.
Très Chic – Bon Voyage

Both Alles and Lara have used the same pose which is *PosESioN* Lady Sexy 1 … made by Dahriel Resident. However the pose that Alles used was modified by use of an Animare HUD – I moved my right arm.