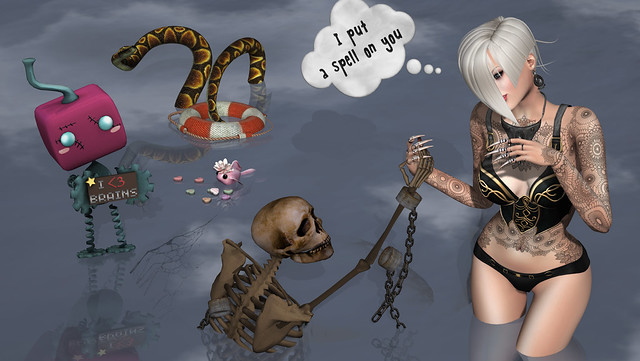 Well at least it’s not a ménage à cinq – cos that would be a real handful!! 😀

And for the record, Alles is wearing the following:

.Shi : Introvert [Unisex . Mono] hair … made by Joy Laperriere. Purchased at the current round of KUSTOM9, which is open from February 15th until March 10th. NEW.

StrawberrySingh.com – Pretty Shape XXS … made by Strawberry Singh. The shape has been modified by me – my hands are now set at 10, my shoulders are at 54, hip width is 58 and my breasts are larger. Purchased on MarketPlace in August 2014.

[White~Widow – NORMAL] Spotlight – Black tattoo for Maitreya Mesh Body … made by Julie Hastings. Available now at the current round of We Love Role-Play, which is open from February 4th until February 29th. NEW.
We Love Role-Play

Meva Enia Necklace Black … made by Mea Carnell. Available now at the current round of Collabor88, which is open until March 6th. NEW.
Collabor88

Pure Poison – Celtic Armor – Maitreya Lara – Black & Gold … made by Shaleene Kenin. Available now at the current round of We Love Role-Play, which is open from February 4th until February 29th. NEW.
We Love Role-Play

erratic / eunice – bikini bottom / black (maitreya) … made by Erratic Rain.
Purchased at the current Espionage-themed round of Collabor88. NEW.
Collabor88

Cursed Bride skirt back side (used as prop)

[ free bird ] Halloween Thought Bubble – Put a Spell On You