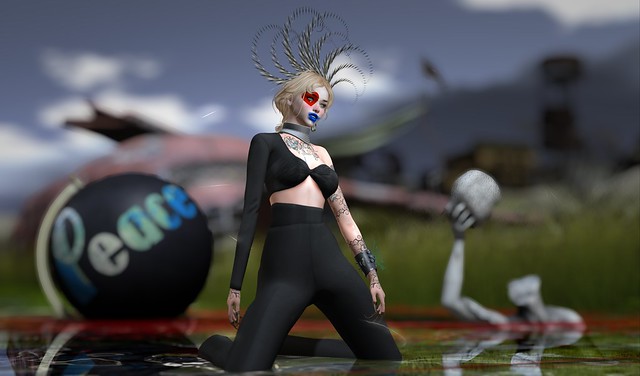 Alles has not been shy of showing her political partisanship ever since the beginning of 2016 and now with the mid-term elections almost upon us in the United States of America, I’m showing my “true blue” colours once again!! 😀

So, on behalf of the rest of the world, please get out and vote to remove as many Republicans as possible from Congress, state governorships and state houses across your great land. Vote blue and help save your own country and the globe.

As for my worn details, this is how I am kitted out.

Lucienne Headpiece … made by Zib Scaggs. Purchased at the current round of the Sense Event, which is open from October 18th through until November 8th. NEW.
Sense Event

The pose that I have used is FOXCITY. Beach Bunny-4m (Fatpack Exclusive) … made by Satomi Masukami. 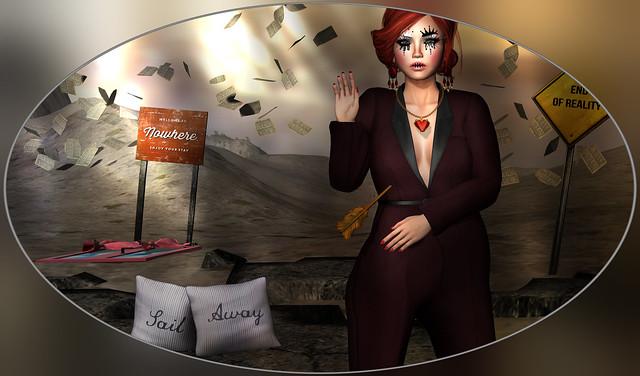 I scuttled over to The Wastelands group of SIMs to do this picture cos I knew that I wouldn’t be disturbed but then a windstorm blew up and bits of flying paper went everywhere.

~Tableau Vivant~ Shabby hair … made by M4ri1yn Magic. I’m wearing one of the Naturals II tones, which has made me into a redhead – yet again! This hair was originally available at the February/March 2015 round of the Shiny Shabby event. NEW-ISH.

Rowne.Herrmann Tuxedo Jumpsuit – Oxblood.L … made by Fashionboi Landar. Purchased at the current round of Uber which began on March 25th and finishes on April 22nd, 2015. NEW.

LaGyo_Metis arrow Gold 1 … made by made by Gyorgyna Larnia. This arrow was available as part of a three-arrow set at the August 2014 round of Collabor88.

The pose that I used is KaTink – Lexington Avenue 4 … made by AnneMarit Jarvinen. This is available as part of a Lexington Avenue set at the Fashion For Life event, which finishes on Sunday March 29th. NEW.

There is more information on the Fashion For Life event here: