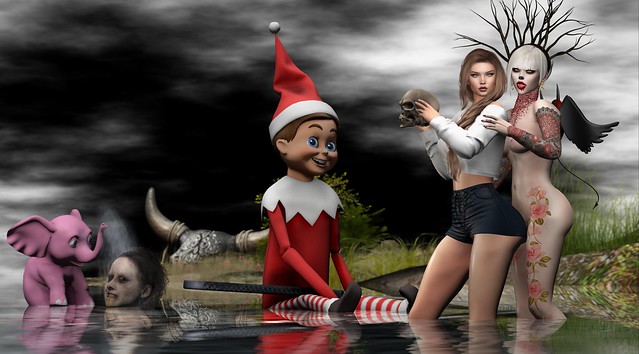 MISCHA – on the left (with clothes on) – is kitted out as follows:

Stealthic – Sultry (L Breast) … made by Stealthic Resident. Mischa purchased the Sultry hair at the current round of Collabor88, which finishes on October 6th. NEW.
Collabor88

ALLES – on the right (without any clothes on) – is kitted out as follows:

LaGyo_Latifah Earring – Gold L … made by Gyorgyna Larnia.
LaGyo_Latifah Earring – Gold R … made by Gyorgyna Larnia.
The Latifah earrings are part of a Latifah set – which also includes a choker and a necklace – that I purchased at the latest round of FaMESHed, which is open from October 1st through until October 27th. NEW.
FaMESHed

Tera Roses Leg TaTToo Color [CAROL G] Maitreya … made by Carolina Gaelyth. Purchased as a Wanderlust Weekend item in mid-September 2019 – which was the very first round of that new event.

Foxwood – Escape – Skull – Dark … made by nina Helix. As this is a copy/modify item I greatly enlarged it and then rezzed the skull at the rear of the scene.

Zombie Head … made by Raya Jonson.
This was purchased on September 26th, 2019 on Second Life MarketPlace:
Zombie Head 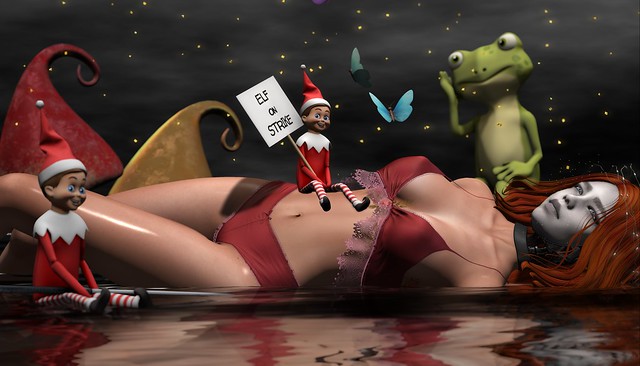 But on the upside, at least one of the Mutresse pigs hasn’t appeared!! 😀

And as for my worn details, this is how Alles is kitted out.

MINA Hair – Carol left (UnFitted) … made by Mina Nakamura.
The Carol hair is available now – in left and right versions – at the latest round of Collabor88, which is open from August 8th through until September 6th. NEW.
Collabor88

AZOURY – Nicodeme Robotic Head {Grey Skin} … made by Aniki Seetan.
The Nicodème head is available at the latest round of the Cosmopolitan Event, which is open from August 13th through until August 25th. NEW.
Cosmopolitan

Shape 2 (for head) {Mod&Copy} … made by Aniki Seetan.
This has been slightly modified by moi with my shoulders now set at 30 and breast size at 65. You need to wear one of the four supplied shapes with the AZOURY Nicodème head, otherwise your head will be distorted – so don’t stay in your shape.

Persefona Sparkles AddON 2 (worn on chest) … made by Persefona Resident.
This is part of a Persefona Floating Petals 2 (big pack 1) that I purchased at the latest round of the Cosmopolitan Event, which is open August 13th until August 25th. NEW.
Cosmopolitan

The pose that I have used is Bauhaus Movement – Sonic Introversion – 35 … made by LouLou Teichmann. This is one of fifty poses in a Sonic Introversion fatpack that I purchased at the latest round of The Liaison Collaborative event, which is open from August 3rd through until August 26th. NEW.
[Note: this pose has been used at a 90 degree angle so that Alles is horizontal and not vertical.] 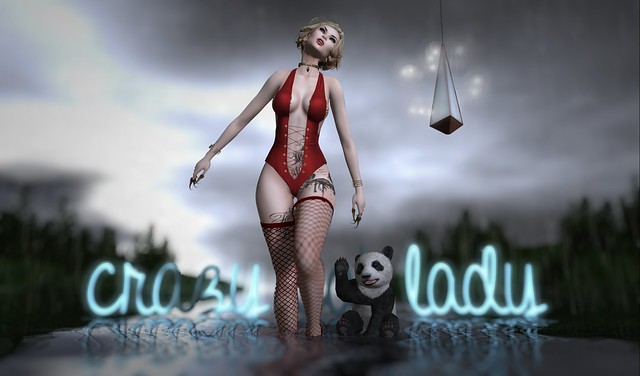 Actually it seems kinda absurd to think that it is now one whole decade since I first appeared in Second Life but in those ten years, lots and lots of things have happened. In June 2007 there was no such thing as Windlight and mesh clothing and mesh avatars were not even a blip on the far distant horizon. And good skins seemed to cost a fortune – which must explain why I didn’t have one for five months.

How things have changed. As for my 2017 fashion details, Alles is wearing the following:

*barberyumyum*93(beige) hair … made by toraji Voom. Purchased as a Fifty Linden Friday item on June 2nd, 2017 – cos it pays to be quick!!

BUENO-Crazy Cat Lady -Blue … made by buenosl Resident.
This is a common prize for BUENO at the June 2017 round of The Arcade Gacha. NEW.
The Arcade Shopping Guide – June 2017

The pose that I have used is Bauhaus Movement – Fade to Black 320 Kbps 08 … made by LouLou Teichmann. The Fade to Black set was available at the May 2017 round of The Liaison Collaborative. NEW. 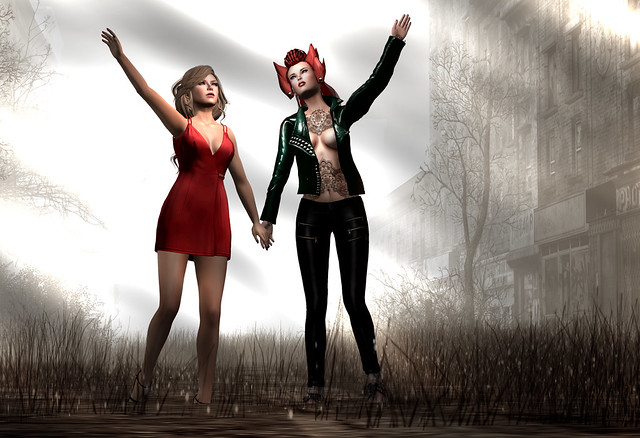 Or perhaps Alles and Rora should look down below? Despite the “sci-fi” bent of this picture, this blog post is all about getting value for your hard-earned lindens in Second Life. Last week I did a post about the Fifty Linden Friday sales (https://dollsandemons.wordpress.com/2015/05/08/with-elo-and-a-doll/) but this week I want to talk a bit about those dedicated sales events which are all about making the consumer happy!!

One of these events is The Dressing Room Fusion (or TDR for short) which is a happy little event which re-occurs on a two-week cycle with new stuffs from a great range of designers, including Baiastice, DRIFT (Kallisto Destiny), Elysium, Glow Studio, Kunglers, label motion, Le Primitif, Ricielli and Your Skin & Your Shape amongst others. But what’s even better than this are the prices – everything in the store is priced between 40 and 70 lindens, whether it’s a set of poses, a cool jacket, lingerie or a fabulous necklace or set of earrings. No wonder these TDR people like to call it the “Kingdom of Shopping”.

RORA – on the left – is wearing the following:

Lowen – Silk Dress [Red/Gold] … made by Gwen Aloix. Purchased at the current round of KUSTOM9 which is open from May 15th until June 10th. NEW.

AZOURY – Walkyries Head Accessory (Red) 1 … made by Aniki Seetan. Available at the May round of IDK, which begins on May 16th and finishes on June 10th. NEW.

~Tableau Vivant~ Faux Dreads – The End (F) … made by M4ri1yn Magic. I’m wearing this in a tone from the Frizzy Chic HUD – Naturals II pack. This hair was originally available at The Secret Affair in March 2015 but should be available in the Tableau Vivant store now.

Ricielli – (m) Studded Jacket /Green … made by Fhara Acacia. Talk about a bargain. I paid a mere 70 lindens for this jacket – it comes in six different mesh sizes and it has an accompanying shirt which I chose not to wear for this picture. Purchased at the current round of The Dressing Room Fusion, which began on May 8th and finishes on May 21st. NEW.
And this is your taxi to TDR … http://maps.secondlife.com/secondlife/Imogen/196/152/28

Maitreya Leather Skinny Pants * Lara Body * Black … made by Onyx LeShelle. And cos I had struck a bargain on my studded jacket, I could then splurge out on this pair of leather pants from Maitreya – and still dress myself from neck to ankle for less than 500 lindens. (Or to know the exact math – the jeans cost 390 lindens).

*YS&YS* Oxford Shoes Antique … made by Monicuzza Babenco. Purchased at the current round of The Dressing Room Fusion, which began on May 8th and finishes on May 21st. NEW.

The two-person pose that Alles and Rora used is .GlamRus. Free … made by GlamRus Resident. Again, this was purchased at the current round of The Dressing Room Fusion, which began on May 8th and finishes on May 21st. NEW.