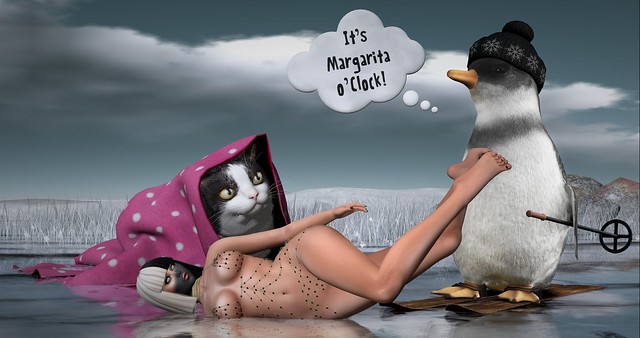 And of course, only the best gin will do – so please make mine Hendrick’s. 😀

As for my kit, this is what Alles is wearing from top to toes.

*PerveTTe* Seduction [Jewerly Body] [Gold] … made by Lanna Cobalt.
I purchased this piece of skimpy attire at the Seduction Fair in December 2018. NEW. 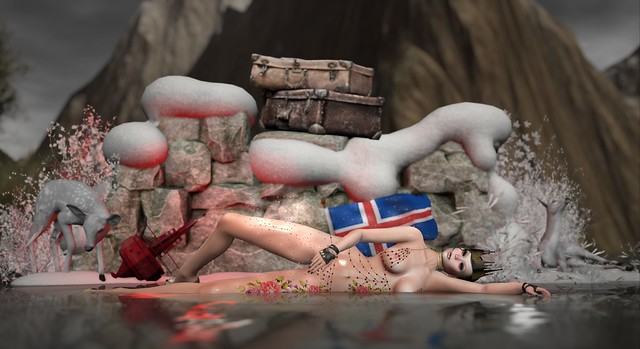 Although in Real Life, I will probably end up with a warm and humid one. But a girl can dream, can’t she?

As for my worn details, this is how Alles is kitted out in “Iceland”.

Nightmare :: Crown of Belial … made by Asylum Miggins.

Tableau Vivant \\ Lelutka hairbase 04 – B … made by M4ri1yn Magic.
The LeLutka hairbase 4 (there are five styles) was available at the round of KUSTOM9, which finished on November 10th. NEW.

*PerveTTe* Seduction [Jewerly Body] [Gold] … made by Lanna Cobalt. Purchased at the Seduction Fair, which is open from December 7th until December 21st. NEW.
Seduction Fair

amias – RANI black – Maitreya … made by Lany Jun.
I purchased this pair of gloves at the current round of the Cosmopolitan Event, which is open from December 3rd through until December 15th. NEW.
Cosmopolitan Event 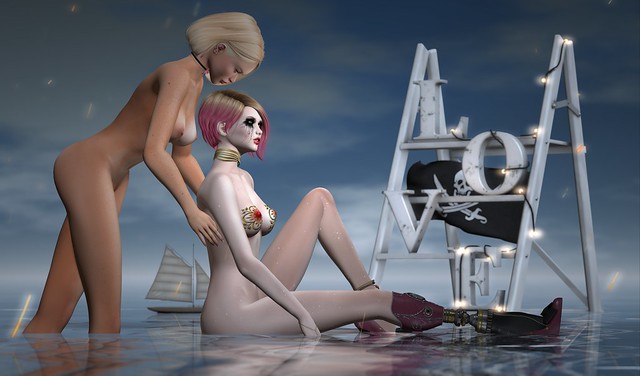 Not to be confused with The Love Cats or even The Pirates of the Caribbean – for that matter!! 😀

LARA – on the left and standing up – is wearing the following:

MINA Hair – Lily [unrigged] … made by Mina Nakamura. This short hair will be available at the next round of the Uber event, which opens on August 25th. NEW.

APPLIER Omega~ Courtesan Royale, Gold +Nip +FGInc.[WEAR]
Courtesan, Royale Breast Paint +Fallen Gods Inc. … made by Alia Baroque. Purchased at the July 2015 round of the ROMP event – may no longer be available.

AZOURY – Shima Shoe Pink [Maitreya] … made by Aniki Seetan. Available now in seven colours at the Blush event, which is open from August 14th until August 28th. NEW.
Blush

AF Ralph’s Boat … made by Apple Fall (aka warehousefifteendesigns Resident). This cute decorative object is Copy/Modify and was purchased on MarketPlace in March 2015.
AF Ralphs Boat

ACORN Love Ladder -White … made by Lulu Rage. Purchased at the Blush event, which is open from August 14th until August 28th. NEW.
Blush

We used two individual poses to make this picture. The pose that Lara used is Purple Poses – Doutzen 05 … made by Audrey Guter. However this pose was tweaked inworld by Lara who used her Animare HUD. The pose that Alles used is Bauhaus Movement – Breaking The Habit 50 … made by LouLou Teichmann. The Bauhaus Movement – Breaking The Habit set of poses is available now at the latest round of The Liaison Collaborative event, which is open from August 7th through until August 30th. NEW.
The Liaison Collaborative 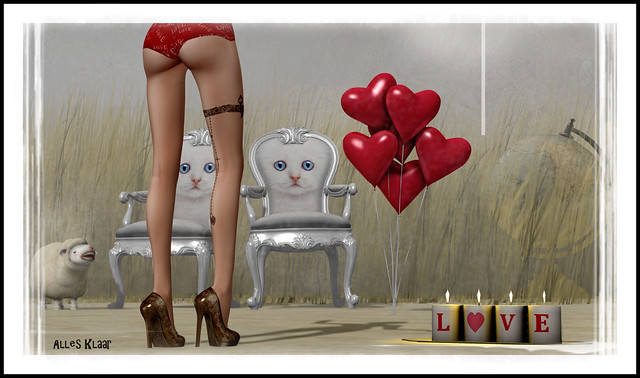 The Love Is In The Air event is well and truly up and running, so if you want to grab yourself some of the sweetest fashions in Second Life this year – then head on over.

In this picture I am wearing the adorable Dahlia Pumps from Eudora in the Materials Enabled version. The detailing on these shoes is simply amazing!! ^^

But from top to bottom (or is it bottom to shoes) I am wearing:

Shakeup! Maitreya Lara Panties Pack [Valentine] … made by Carrie Janick. The pack has seven different colours/designs and I am wearing the LOVE variant. Available now at the With Love Fair which is open from February 6th-20th – and not to be confused with the Love Is In The Air event. NEW.

*PerveTTe* [Tattoo] Lock Garter … made by Lanna Cobalt. This is available in four mesh body variants as well as clothing and tattoo layers for standard bodies. Purchased in February 2015.

Eudora 3D Dahlia Pumps right (materials) … made by Eudora3D Resident. Available now at the Love Is In The Air event. NEW.

{what next} LOVE Candles Decor … made by the wonderful Winter Thorn. Purchased in February 2015.

{what next} Sweetheart Balloons Decor … made by FrankLee Anatra. Available now at the Love Is In The Air event, which will remain open until February 14th, 2015. NEW.

The pose that I have used is *PosESioN* Corazon 4 … made by Dahriel Resident. This pose is available as part of a Corazon set at the Love Is In The Air event. NEW.