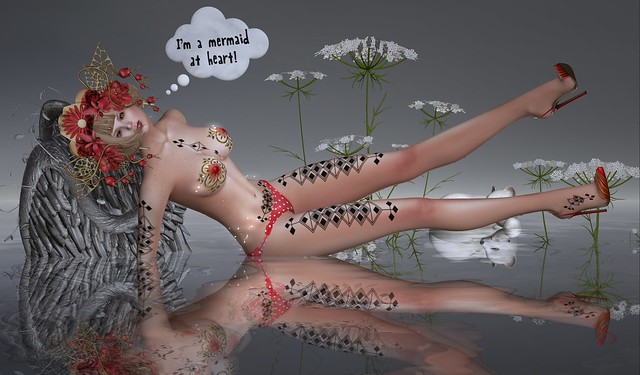 Today Alles is an angel who came down to earth … to frolic in the sea!! And as for fashion details, Alles is wearing the following:

Blueberry – Oakley Wings – Silver … made by Blueberryxx Resident. This was a common item on a gacha at the April/May round of The Epiphany event but Alles bought this recently on Second Life MarketPlace for just 99 lindens, which was less than twice the original “pull price”.

[ILAYA] THE CUBE [TATTOO] B/M/S Hud {Black} … made by Ilaya Allen. I am wearing this tattoo with a Maitreya applier. Available now at the current round of Shiny Shabby, which is open until August 15th. NEW.
Shiny Shabby – [ILAYA]

Pure Poison – Jara Sandals – Maitreya … made by Shaleene Kenin. These are available now at the fifth anniversary round of Collabor88, which is open from August 8th through until September 6th. NEW.
Collabor88

Heart – Wild Flowers – Quenn Ann’s Lace – P3 … made by Lilith Heart. Purchased as part of a set at the current round of FaMESHed, which is open from August 1st until August 27th. NEW.
FaMESHed

And lastly, the pose that I have used is *PosESioN* Aerobic 3 … made by Dahriel Resident. However this pose has been loaded into a pose stand and then I tilted the pose stand at about 90 degrees, so that rather than be upright, I was laying back, resting in the water. 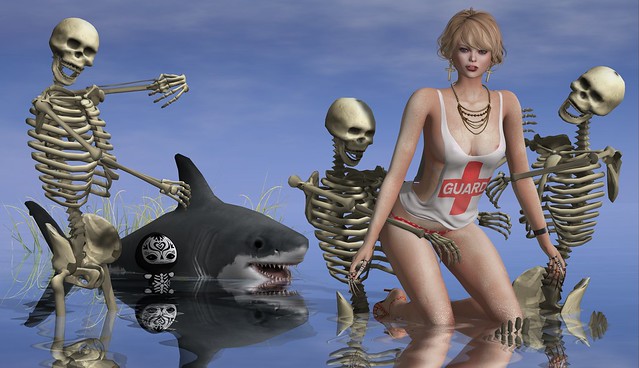 Why indeed? But in Second Life I seem to attract sharks, skeletons and the occasional snake and octopus as well … like moths to a gosh-darned flame!! 😀

Izzie’s – Body & Face Beach Sand … made by Izzie Button. I am wearing this with a Maitreya Lara Body Applier (unfortunately there is no applier for my LeLutka head). Purchased at Summerfest ’16, which is open from June 18th until July 10th. NEW.
Summerfest ’16

Meva Nemia Necklace Gold … made by Mea Carnell. Available now at the latest round of The Chapter Four event, which is open until July 24th. NEW.
The Chapter Four

JIAN :: Great White Shark (Static) … made by JianSL Resident. Purchased at the Summerfest ’16 event, which finished on July 10th. NEW.