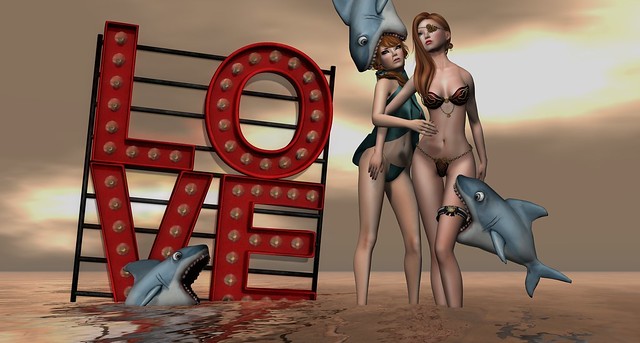 In Australia, where I live, we eat sharks … the fish called “flake” is actually one of a number of small sharks that end up in the human stomach every time we have some fish’n’chips. But in Second Life, the sharks have their revenge – or at least they try to. But all these small sharks seem to want to do is to kiss Rachel and me!! 😀

ALLES, on the left, is wearing this:

[BODY FACTORY] Nose Chain (Gold) R … made by Deco Olinger. Purchased at the 5th Avenue event which is open from February 20th through until March 2nd. Discount price.

RACHEL, on the right, is wearing:

[Con.&floorplan.] Love Marquee … made by ValiantCo Resident. Purchased at the November 2014 round of Uber

The pose that we used is KaTink – Posh … made by AnneMarit Jarvinen. However I edited this a bit using my Animare HUD to move my right hand from Rachel’s shoulder down to her midriff.