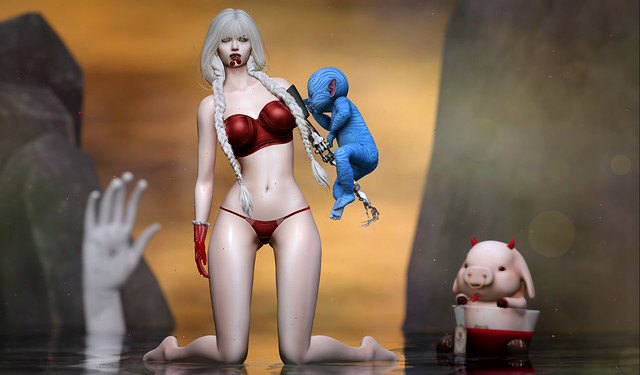 Although given the racket it makes when it’s around I may soon run out of love!! 😀

The pose that I have used is Pose It-Oct Carnival Clown1 … made by Sirenity Soon. However I tweaked this pose by using my Animare HUD and moved my left arm somewhat. OK – it was moved a lot, cos before it was far above my head. 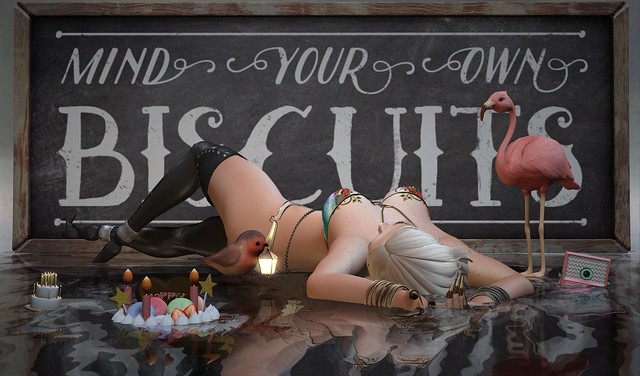 I loved this silly play on words by Tegan Serin in this week’s Fifty Linden Friday offering from floorplan so much that I just couldn’t wait to use it in a photograph!! 😀

As for my fashion details, Alles is wearing the following kit.

floorplan. mind your own biscuits sign … made by Tegan Serin. This was purchased as a Fifty Linden Friday item on November 17th, 2017.

+Half-Deer+ Nightglow Bird – Robin – Lantern (up) … made by Halogen Magic.

Chira *Anniversary Cake* [Headdress] … made by YukaChoco Magic. This is a gacha item for Chocolate Atelier at The Cookish Fair event, which is open from November 17th until November 28th. However rather than wearing it as a hat – as the maker intended – Alles has rezzed it and placed it beside herself. NEW.
The Cookish Fair

And lastly the pose that I have used is Imagination … made by VirginiaPlain Resident. This is one of many poses that are branded under the KOPFKINO label.
:KOPFKINO: by Lily Lovelace 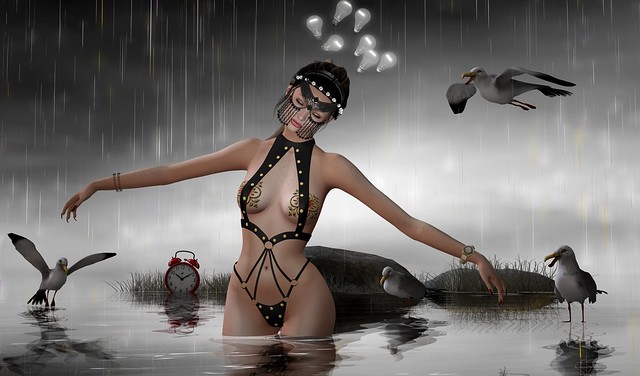 And perhaps they dream of me?

The pose that I have used is Bauhaus Movement – Razorblade Remix 11 … made by LouLou Teichmann. 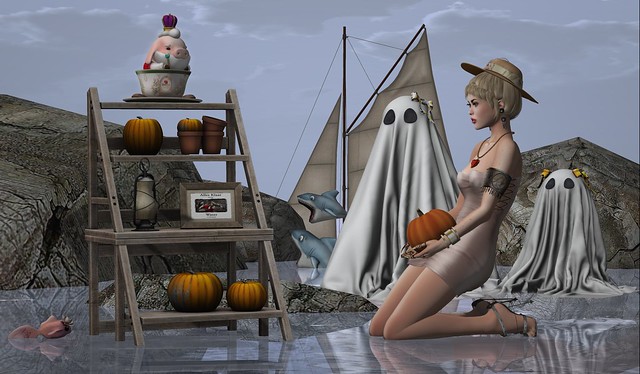 The Halloween season is about to begin but Alles decided to get in early with her gift of a pumpkin for the Teacup King!! 😀

As for styling details, they are as follows. Alles is wearing:

Ariskea [ Belle ] Hat in Peach … made by Diaxm Resident. Purchased as part of a Belle hats collection (fatpack) at KUSTOM9 in March 2015.

MINA Hair – Paige 1 … made by Mina Nakamura. I am wearing this short hair in a Dark Blond tone. This hair was available at the just-finished September 2015 round of The Chapter Four event, which means that it should be on sale in the MINA store inworld very soon. NEW.

erratic / adriana – dress / skin (maitreya) … made by Erratic Rain. I bought the fatpack of the Adriana dresses cos Erratic Rain does the best value fatpacks on the Second Life grid and also cos I love this slinky lil’ dress. Purchased at the current round of Uber, which is open from September 25th until October 23rd. NEW.
Uber

Meva Carnival Upper Arm Cuff left .. made by Mea Carnell.
This was purchased as part of a set at the recent August/September round of The Fantasy Gacha Carnival, which finished on September 12th. NEW.

AZOURY – Titane Shoe metal – (Maitreya) … made by Aniki Seetan. The Titane shoes will be available at the Third Anniversary Round of the Cosmopolitan event, which is open from September 28th until October 11th. NEW.
Cosmopolitan

stones3 – 8 pcs – 1 prim COPY MODIFY … made by Nadine Reverie. Available at her store inworld or on MarketPlace. I paid the grand sum of 10 lindens for them!!

AF Ralph’s Boat … made by Apple Fall (aka warehousefifteendesigns Resident). This Skippy-approved object is Copy/Modify (the version here has been enlarged) and was purchased on MarketPlace in March 2015 for a mere 125 lindens.
AF Ralph’s Boat

!O: Teacup Piglet Gatcha [Royal Edition: King] RARE … made by Anya Ohmai. This was a gacha item at the June 2013 round of The Arcade Gacha, however the Teacup Piglets gacha machine is now alive and well at the !Ohmai satellite store.
!Ohmai Satellite Store

:CP: Autumn Step Frame Natural … made by Isla Gealach. The step frame includes all of the items that are on the first, second and third steps. The picture frame on the second step is customisable and I dropped in an old gallery picture of mine from 2013. This prop is available now at the latest round My Attic @ The Deck, which finishes on September 30th. NEW.
My Attic @ The Deck

The Hive – Small Pumpkin … made by TheHiveStore Resident. I am holding it in my hands as a gift for the Teacup King. Purchased as part of The Hive – Pumpkin Cart Set [FATPACK] at the current round of the No 21 event, which is open from September 21st through until October 11th. NEW.
No. 21 Event

And lastly, the pose I have used is DM – Spent … made by Del May.
Del May Mainstore 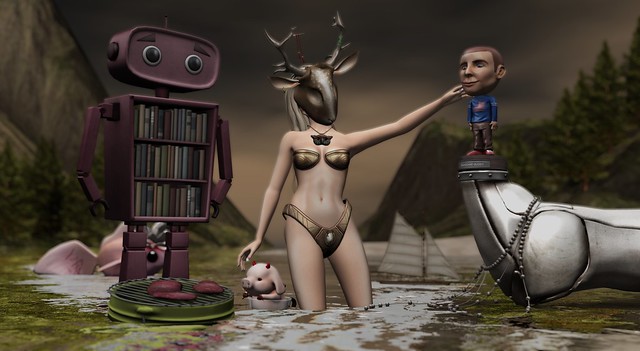 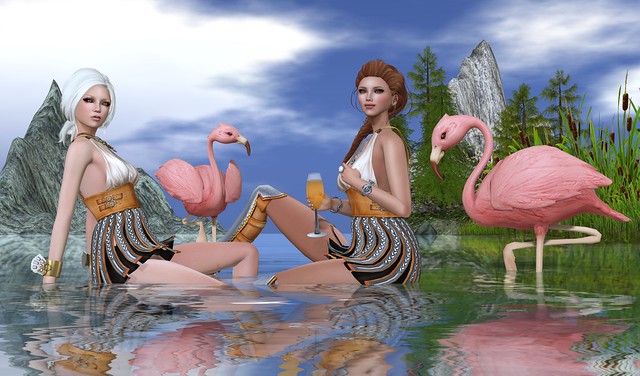 And a gladiator or two. It’s a little known fact that there were female gladiators in ancient Rome, so in order to investigate this situation Tamarind and myself teleported ourselves back in time to when the Roman Empire was at its height. Anyway, after a hard day spent fighting lions and then throwing them to the Christians, we gave ourselves an early mark from all of this toil at the Coliseum and headed over to the Sarawak SIM where we soaked our aching legs in the water and communed with the resident flamingos. Oh … and Tamarind had a little tipple!!

Tamarind and I are both wearing the -Pixicat- Gladiator.Dress – Brown. Made by areve Resident, this cute little outfit is still available at the latest round of Collabor88 in Second Life … but get there quick before it closes. NEW.

Individually, this is what else we are wearing.

~Tableau Vivant~ Writer Hair … made by M4ri1yn Magic. Available at the September 2014 round of The Arcade Gacha. NEW.

[:T:] Parted lips 7 … made by Tuli Asturias. Free on MarketPlace.

-Pixicat- Gladiator.Dress – Brown (xs) … made by areve Resident. Purchased at the August 2014 round of Collabor88. NEW.

And Tamarind (on the right) is wearing this:

The two props I have used are:

The pose that we used is oOo Troika c/m/nt … made by Olaenka Chesnokov. Purchased in August 2014 – but not new.