MINA Hair – Agnes … made by Mina Nakamura.
This long silky hair with soft bangs was first available at the Santa Inc. event in December 2020 but can now be purchased on Second Life MarketPlace or inworld.
Agnes Hair @ MINA Mainstore

ERSCH – Neriah Bodysuit {Lara} w\glow -black- … made by INIMIRA Resident (aka the ERSCH rig-testing account). Purchased at the CyberPunk Fair, which is open from May 8th through until May 30th. NEW.
CYBERPUNK FAIR 3rd Edition

amias – THEA gloves – Maitreya … made by Lany Jun.
Originally purchased at Part 2 of the 8th Anniversary round of the Cosmopolitan Event in late May 2020 but they are now available on Second Life MarketPlace.
amias – THEA gloves 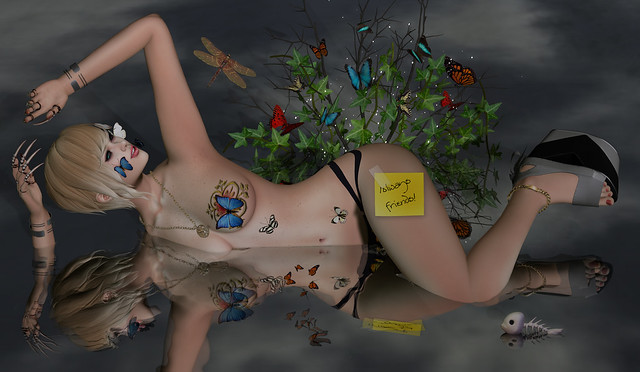 And I love my life with them, cos they are such beautiful little creatures!! 😀

Tableau Vivant \\ Keri hair … made by M4ri1yn Magic. I am wearing this hair in a tone from the Ombres pack. Available now at the 4th Anniversary round of FaMESHed, which is open from May 2nd until May 27th. NEW.
FaMESHed

StrawberrySingh.com – Indira Shape S Standard Size … made by Strawberry Singh. Modified a bit by me – the hands are now set at 10, my shoulders are set at 50 and my hip width is now 65. Purchased on MarketPlace in July 2015.

Persefona Shoulder Butterflies – Right (orange) … made by Persefona Resident. These were moved in Edit so that they appear to be in front of my stomach.

TETRA – Spring Panties (Arctic) – Maitreya … made by NataPorolo Resident. Purchased at the latest round of the Uber event, which is open until May 23rd. NEW.
Uber

[ Lucky #7 ] Post-Me: Always friends … made by Shortcake Sugarplum. I am wearing this item as an attachment to my left thigh. You can purchase a complete set of Post-Me notes – which can either be rezzed or worn on your body – on Second Life MarketPlace. Available here:
Post Me Notes

.Enfant Terrible. Verelis Dragonfly Hair Gift! Gold … made by LeEnfantTerrible Resident. The dragonfly was a gift at the May 2015 round of We Love Role-Play.

LOVE – BUTTERFLY QUEEN … made by Krystali Rabeni. This is actually a headpiece but I rezzed it next to my body as a piece of butterfly-infested greenery. Purchased at the Fantasy Faire event, which finished on May 1st. NEW.

The pose that I have used is ground 04 … made by Weronika Pobieski. This pose is part of a Frozen – Sensual Ground Poses set, that is available now at the latest round of The Dressing Room.
The Dressing Room