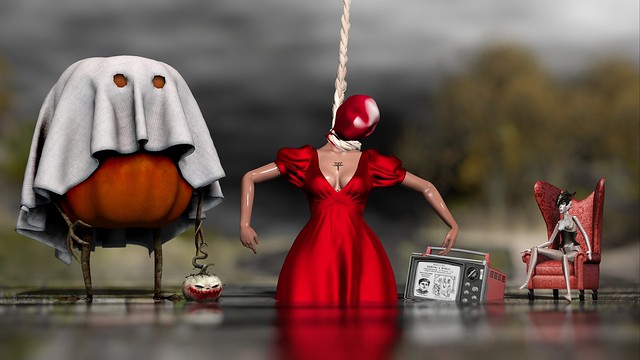 We all know the basics of the story of Rapunzel: a girl with long hair is imprisoned in a tower by an evil witch; a prince comes along, climbs up the hair and then rescues said trapped princess. Well, as you can tell the Tableau Vivant version of that fairy tale sees poor Rapunzel strung up by her own hair instead and there is no prince in sight to rescue her. The Rapunzel hair is available now at the current round of Collabor88, which is open from October 8th through until November 6th. NEW.
Collabor88

.AiShA. Gothel Dress Maitreya Red … made by AmandaMir Resident.
This gorgeous dress was first available at the May 2017 round of Enchantment but Alles purchased it on October 7th, 2020 at the .AiShA. store at Sylpha.
AiShA Mainstore @ Sylpha

The pose that I have used is [LAP] – Broken Puppet … made by Dove Swanson. However this pose was acquired back in August 2008 and as the maker states on her profile: [Long Awkward Pose] is closed, and I’m not around often – so I’m sorry but no I can’t sell to you directly and am not interested in selling my inventory to a reseller. Thanks! ❤