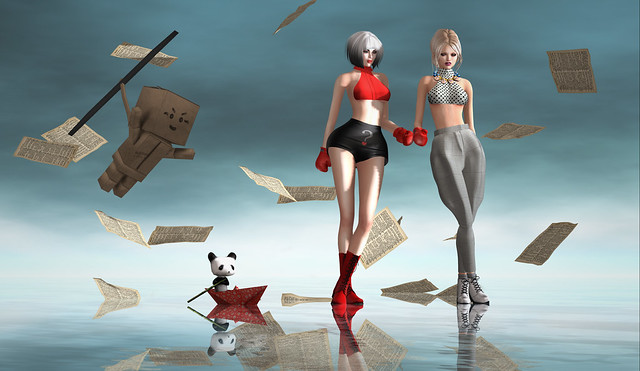 According to Wikipedia, Boxing Day is a holiday traditionally celebrated on the day following Christmas Day, when servants and tradesmen would receive gifts, known as a “Christmas box”, from their masters, employers or customers, in the United Kingdom, Australia, Canada, New Zealand and other countries of the Commonwealth of Nations. In some European countries, most notably Germany, Poland, the Netherlands and those in Scandinavia, December 26th is celebrated as the Second Christmas Day.

But in Second Life I like celebrating Boxing Day with a twist, which is why on December 26th I am wearing boxing gloves with my friend Jasmine Hera. 😀

We are both wearing tops called joni by Riri Bazar – available now at On9. Jasmine is also wearing the joni pants.
The current “Fire & Ice” round of the On9 event is open until December 28th.
On9

Pewpew! Carton Tales 1 – Peter “On Duty” RARE … made by Ramadiez Carter. Purchased on a gacha machine at the current round of the Shiny Shabby event, which is open from December 20th through until January 15th, 2016. NEW.
Shiny Shabby