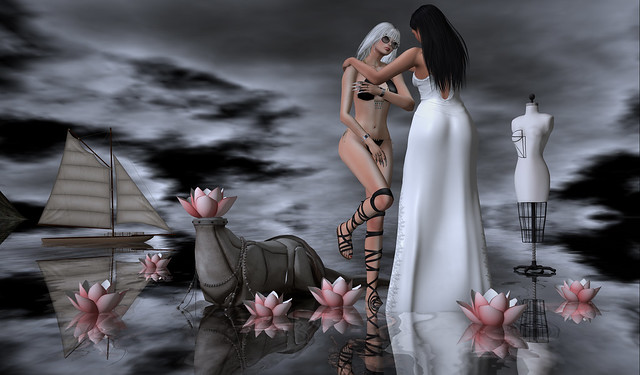 It’s what our world needs now – not the fear and loathing that is being spread by some.

MINA Hair – Odyle (materials) … made by Mina Nakamura. I am wearing this hair in a tone from the Grey pack. Available now at Hair Fair 2016, which is open July 16th until July 31st. NEW.
Hair Fair 2016 – Backlot Central

ELO – on the right – is wearing the following:

.Entwined. Alison … made by VivienMarli Resident. Elo is wearing this long hair in a tone from the Grey Scales pack. This hair was originally purchased at the March/April 2016 round of the Shiny Shabby event but is now available instore or on Second Life MarketPlace.

We used two single poses to make this picture. The pose that worried Alles used is Amitie -The Pool – 08 … made by BELEN Ackland, while the pose that dear Elo used is Pose It-Wind Blown … made by Sirenity Soon. 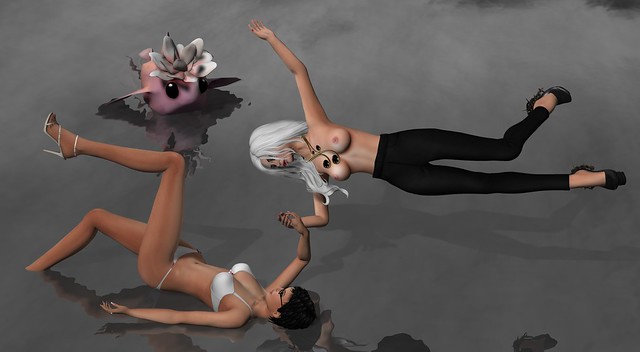 In which Alles and Sugar shook hands while a pink fish looked on at them!! 😀

This picture was taken in the Black Kite SIM – where rezzing is allowed if you join their group. As for worn details this is what we were “dressed up” in.

ALLES – in the air – is wearing the following:

MINA Hair – Elvire – Busty 2 (materials) … made by Mina Nakamura. I’m wearing a grey tone from the Fatpack HUD, although I would prefer to call this shade, “platinum blonde”. The Elvire hair will be available at the May round of FaMESHed, which begins on May 1st, 2015. NEW.

no. 7 Fantasy Face Gems [full] … made by Shortcake Sugarplum. NEW.

AZOURY – Belissende – Ladybug (Mouth) … made by Aniki Seetan. This cute accessory will be available at the Très Chic Event, which begins on May 1st, 2015. NEW.
More details here:
http://www.azoury.fr/#!Belissende-Ladybug-for-Très-Chic-Event/c22xl/553a257f0cf2adc1ace5e11b

[Modern.Couture] Jewelry – Doriana Black Necklace … made by Donatela Couturier. Purchased at The Black Fashion Fair which will finish on May 4th, 2015. NEW.

:::LP::: Suspender_Leggings XXS – Black … made by yani Tryce. Please note that I removed the braces for the leggings in Photoshop so the necklace could stand out alone. Purchased at the spring round of The Seasons Story which finished on April 30th, 2015. NEW.

AZOURY – Innamoramento high-heeled – (Maitreya) – Dark … made by Aniki Seetan. These “lethal” heels will be available at The Dark Style Fair which begins at 7am on May 1st, 2015. NEW.

The prop that I used in this picture is:

The pose that Sugar and I used is . Infiniti . – No Gravity … made by Brandi Monroe. Purchased at the September 2014 round of The Liaison Collaborative.