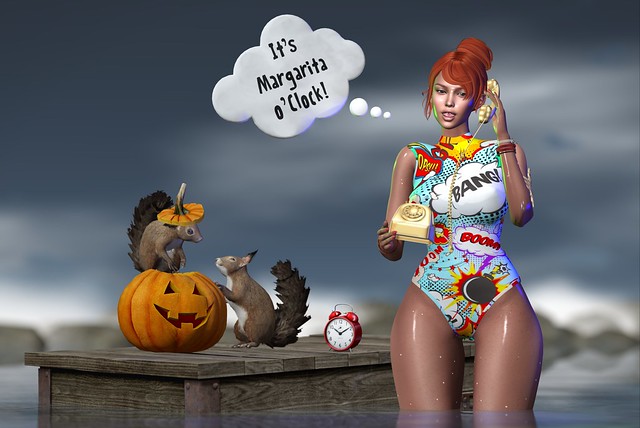 As you can see in this blog image I am calling up some friends to join me in an impromptu party at the seaside – with two squirrels who are already in the partying mood!! 😀

So I do hope they hurry here and bring me some margaritas, of course! In the meantime, this is how I am kitted out at Ostoja.

Tableau Vivant \\ Gothloli hair [mirror] … made by M4ri1yn Magic. Worn in a tone from the Reds pack. Gothloli is available now at the latest round of KUSTOM9, which is open from September 15th through until October 10th. NEW.
KUSTOM9

SPIRIT – Dorka glitter [M.Lara] … made by Spirit Osmus. Worn on right hand. Purchased at the previous round of Collabor88, which finished on September 6th. NEW.

Melanzana – Ann Bodysuit – Maitreya Lara … made by KatrinBird Resident. Purchased at the current round of Shiny Shabby, which is open from August 20th through until September 16th. NEW.
Shiny Shabby

Lavish / Let’s Go Back To Vintage / Gold / Fullbody3 … made by LiaCamille Resident. This is the telephone that is resting on my right hand and being held against my left ear. Purchased at the latest round of equal10, which is open from September 10th through until October 5th. NEW.
equal10