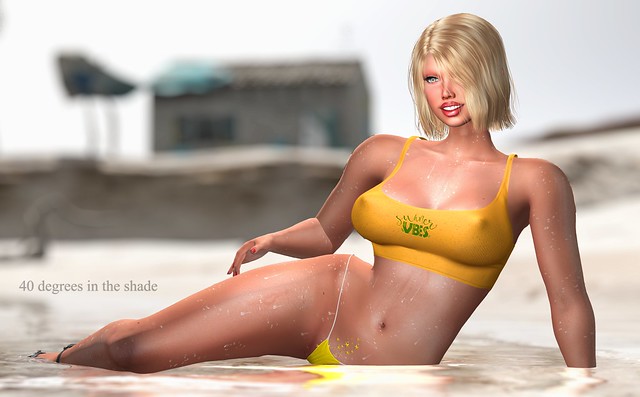 You know it’s really, really hot when it’s forty degrees in the shade – and what better place to spend this heatwave than in the cool waters at Le Monde Perdu!! 😀

MINA Hair – Doris interactive (rigged) … made by Mina Nakamura.
Doris – the hair – is available now at Summerfest ’22, which is open from June 18th through until July 10th. NEW.
Summerfest ’22 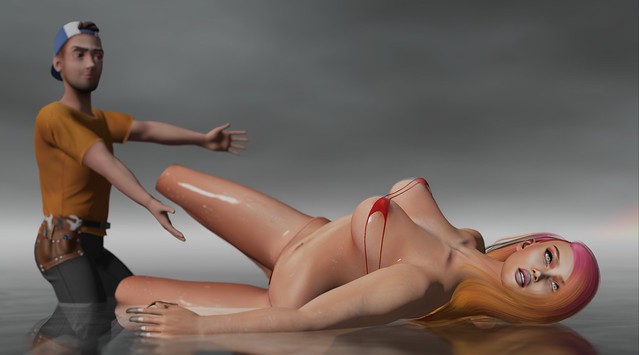 Well given that the hair that I am wearing is called “Avril” how could I resist a blog title like this!! 😀

Izzie’s – Wet Body & Face … made by Izzie Button. Worn via applier on Maitreya body only.

EQUAL – Lola Diamond Claws [Mait.] R … made by Blue Absinthe (formerly Kashvii Resident). Purchased at the Fetish Fair 2018 event, which was held way back in February 2018.

The pose that I have used is Inflorescence – come here my love … made by FloraClayflower Beeswing. However I modified the pose a bit inworld using my Animare HUD. 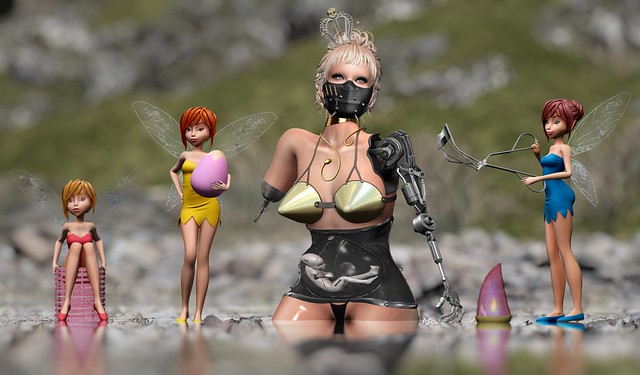 Or something to that effect because at least four of the items that I am wearing were made by AZOURY! 😀

As for my worn details in total, this is how I am kitted out.

AZOURY – Certitude – Maitreya Lara [L] … made by Aniki Seetan. The Certitude metal arms (I’m only wearing the left one) are available at the latest round of the Dubai Event, which is open from July 20th through until August 12th. NEW.
Dubai Event

AZOURY – The Eyes of the Truth {Corset Pregnant Robotic} … made by Aniki Seetan.

Pose is SP – Faith 4M but tweaked a bit by moi.

But who is making these sparks fly about? Is it Alles, or the four Santa’s Helpers perhaps? 😀

Who knows – but as for her worn details, this is how Alles is kitted out today.

GizzA – Peacock Necklace [Coral] Gold … made by Giz Seorn. This is an old item but a goodie and you can find it in the GIZ SEORN Mainstore during the Black Friday sales from November 26th through until November 30th at a 70% discount.
Peacock Necklace @ GIZ SEORN

The pose that I have used is :studiOneiro: I am your gift … by Anaya Oneiro aka Anaya Twine. However I tweaked this pose inworld by using my Animare HUD. 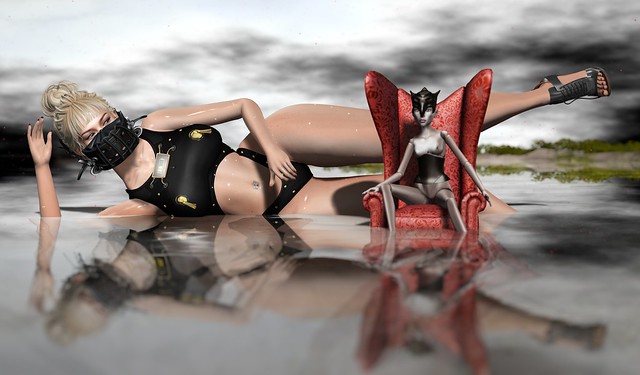 Of course, she’s the one who thinks that she is stealing the show!! 😀

And these are the fashion details for my picture.

tram H0814 hair … made by moca Loup. I am wearing this “geeky girl” short hair in a tone from the HUD-B pack. Originally purchased at the August/September 2018 round of Uber but it is now available at the tram store at Minnaloushe.
tram H0814 hair @ Minnaloushe

Baiastice_BJD vol.2 Genesis Collection_Aida 7 RARE … made by Sissy Pessoa.
This is a gacha item that you can get at the latest round of The Arcade Gacha, which is open from September 1st through to September 30th. NEW.
The Arcade

Pose is [ west end ] Bento Poses – Love Kitty – 07 – but tilted a bit on its side and then modified via my Animare HUD. 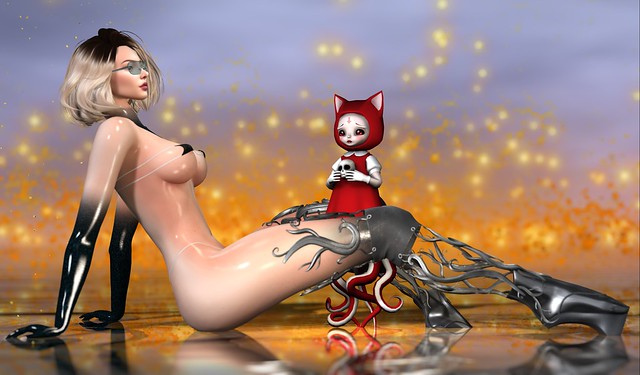 I mean who wouldn’t want to stay friends with an adorable cherub like moi!! 😀

Leaving that aside, this is how Alles is kitted out today – so to speak.

Tableau Vivant \\ Nany hair … made by M4ri1yn Magic. I’m wearing this medium length hair in a tone from the Blonds pack. Nany is available now at the anniversary round of Collabor88, which is open from August 8th through to September 6th. NEW.
Collabor88
OR
Collabor88 Cam Sim 1 (Collabor)
OR
Collabor88 Cam Sim 2 (Shopping)

The pose that I have used is GingerFish Poses – Sea Jewel 4mirror … made by Tracy Redangel. However I made minor adjustments to this pose by using my Animare HUD inworld – I changed the position of my head and my left leg. 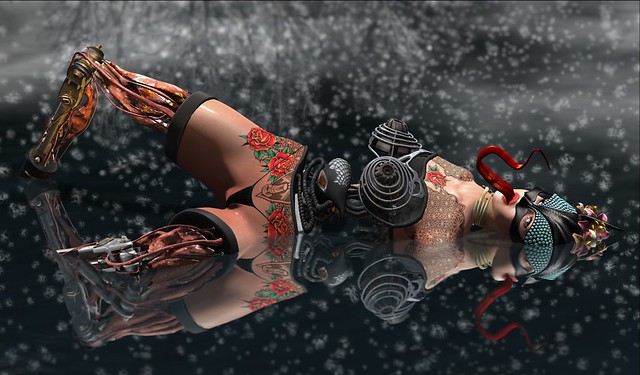 For 4,000 years Lilith has wandered the earth, figuring in the mythic imaginations of writers, artists and poets. Her dark origins lie in Babylonian demonology, where amulets and incantations were used to counter the sinister powers of this winged spirit who preyed on pregnant women and infants. Lilith next migrated to the world of the ancient Hittites, Egyptians, Israelites and Greeks. She makes a solitary appearance in the Bible, as a wilderness demon shunned by the prophet Isaiah. In the Middle Ages she reappears in Jewish sources as the dreadful first wife of Adam.

In the Renaissance, Michelangelo portrayed Lilith as a half-woman, half-serpent, coiled around the Tree of Knowledge. Later, her beauty would captivate the English poet Dante Gabriel Rossetti. “Her enchanted hair,” he wrote, “was the first gold.”1 Irish novelist James Joyce cast her as the “patron of abortions.”2

In most manifestations of her myth, Lilith represents chaos, seduction and ungodliness. Yet, in her every guise, Lilith has cast a spell on humankind.

The ancient name “Lilith” derives from a Sumerian word for female demons or wind spirits—the lilītu and the related ardat lilǐ. The lilītu dwells in desert lands and open country spaces and is especially dangerous to pregnant women and infants. Her breasts are filled with poison, not milk. The ardat lilī is a sexually frustrated and infertile female who behaves aggressively toward young men.

In most manifestations of her myth, Lilith represents chaos, seduction and ungodliness. Yet, in her every guise, Lilith has cast a spell on humankind.

Well, this version of Alles might well be posing as a seductress but I’m definitely sure that my wiry breasts could never dispense milk, let alone poison! 😀

And so, this is how Alles aka Lilith Augmented is kitted out today.

*katat0nik* (tropic) Space Lilies Head Accessory … made by Katat0nik Pidgeon. Purchased at the June/July 2019 round of Collabor88 but possibly no longer available. But you can check out the *katat0nik* Main Shop here if you like:
*katat0nik* @ Katat0nik

Baiastice_Bellatrix-Cat Mask … made by Sissy Pessoa.