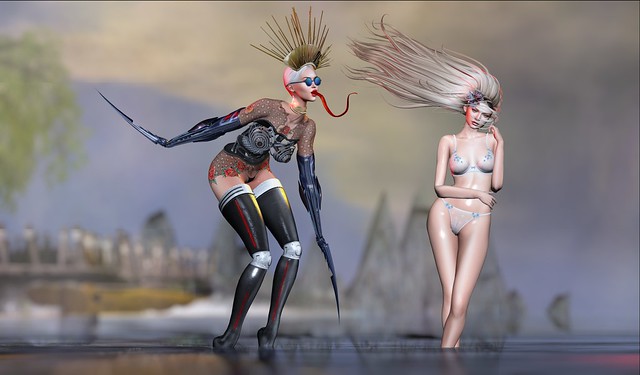 Or is this the tale of Andromeda spurned … so sad!! 😦

OPHELIA – on the right – is wearing the following: 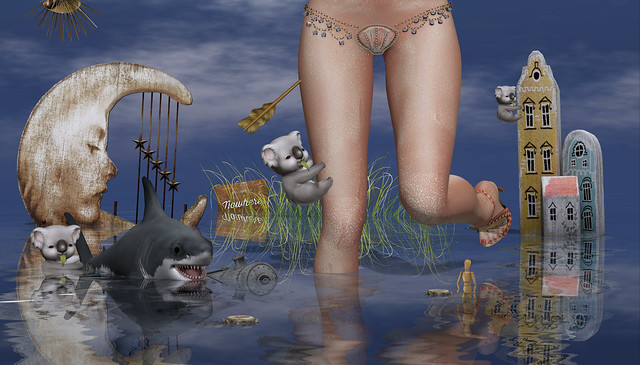 I don’t know if I’m an actor or ham
A shaman or sham but if you don’t mind, I don’t mind

Well, this is Second Life after all!! As for fashion details, Alles is wearing the following:

Izzie’s – Body & Face Beach Sand … made by Izzie Button. I am wearing this with a Maitreya Lara Body Applier. Purchased at the Summerfest ’16 event, which finished on July 10th. NEW.

MishMish – Koala (narrow – upperleg R) … made by Aime Takaaki. Purchased as part of a Koala Companion set at the June/July round of Collabor88, which finished on July 6th. NEW.

Pure Poison – Caroline Sandals – Maitreya … made by Shaleene Kenin. Available now at the current round of Collabor88, which is open from July 8th until August 6th. NEW.
Collabor88

ieQED burst.metal.crown.gold … made by SigiFaust Resident. This is the “satellite” that is in the top left-hand corner of the image. As the crown was COPY, I rezzed it first and then reduced the size and edited into position.

JIAN :: Great White Shark (Static) … made by JianSL Resident. Purchased at the Summerfest ’16 event, which finished on July 10th. NEW.
NB: I made the shark very much smaller than it was in the original form!

Kalopsia – Train/Tank Miniature (Clean Grey) … made by Isabeau Baragula. This prop was modified via unlinking the base and then I further reduced its size.

{vespertine} welcome to nowhere/rust sign /small … made by Amelie Knelstrom.

{anc} retro swim ring (yellow) 5Li … made by aki69 Resident. This prop has been made rather miniscule compared to its original size by … moi! Purchased as a Fifty Linden Friday item on June 3rd, 2016.

Apple Fall Small Wooden Houses … made by made by Apple Fall (aka warehousefifteendesigns Resident). Purchased at The Seasons Story in July 2014. 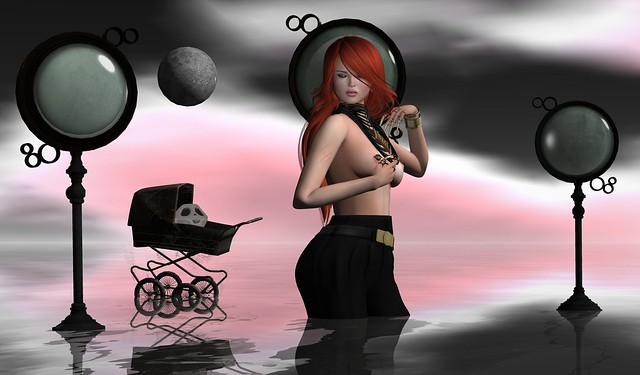 In which Alles is confronted with the spectacle of a pink sky and several moons in the picture, while a strange child is smiling in the baby carriage. Methinks Halloween is coming soon!! 😀

enVOGUE HAIR – Melissa … made by Casandra Rain. I am wearing this hair in a tone from the Dark Blondes tone HUD.
enVOGUE Hair

StrawberrySingh.com – Indira Shape S Standard Size … made by Strawberry Singh. Modified a bit by me – the hands are now set at 10, my shoulders are set at 50 and my hip width is now 73. Purchased on MarketPlace in July 2015.

Meva Big Leather Necklace Gold … made by Mea Carnell. Purchased at the current round of the On9 event, which is open from September 9th until September 28th. NEW.
On9

ieQED count.nippula.nipple.ring.obsidian … made by SigiFaust Resident. Purchased as a Fifty Linden Friday item on September 11th, 2015.

-David Heather-Natori Trousers/Black L … made by Gianni Broda. Purchased in September 2015 when David Heather had a three-day 75% off everything sale.

Pure Poison – Magnifier Linked … made by Shaleene Kenin. Available now at the current round of Collabor88, which is open from September 8th until October 6th. NEW.
Collabor88

And lastly, the pose that I have used is oOo ziegfelds_one … made by Olaenka Chesnokov.