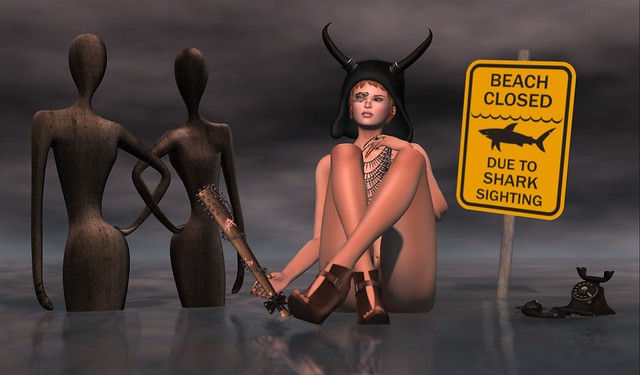 Well, I do think that a baseball bat with spikes attached should deter a few sharks at the very least!! 😀

As for my fashion details, they are as follows:

Pure Poison – Ariana Hat – Black … made by Shaleene Kenin. Available now at the Valhalla-themed round of The Secret Affair, which is open from September 15th through until September 30th. NEW.
The Secret Affair – Entrance Portal

MINA Hair – Paige 1 … made by Mina Nakamura. I am wearing this hair in a Light Brown tone. Available now at the latest round of The Chapter Four event, which is open from September 4th through until September 25th. NEW.
The Chapter Four

DRD Anarchy necklace … made by Jaimy Hancroft. Purchased at the August/September round of The Fantasy Collective which closed recently. NEW.

[EZ] The Horror!~ Riot Bat (Pink) -novo2.03 (Low Damage) … made by Deccan Arida. Purchased at the August/September round of The Fantasy Collective which closed on September 14th – a day early. NEW.

fri. – Samantha.Booties (Copper) – Maitreya … made by Darling Monday. Available now in eight different colours and fittings for both Maitreya (Lara) and Slink feet at the current round of Collabor88, which is open from September 8th through until October 6th. NEW.
Collabor88

On the left-hand side of the picture are a pair of joined mannequins, which I linked together in Edit mode as they have Modify permissions.
*LODE* Deco – Fashion Silhouette [wood] … made by Chirzaka Vlodovic.

18 – 8f8 – Storyteller’s Burrow – Off the Hook … made by 8f8 Resident. This item is available now on The Story Teller’s Burrow machine at the September 2015 round of The Arcade Gacha but Alles purchased it at Gachaopolis (formerly The Pea). NEW.
Gachaopolis

And lastly, the pose that I used is Kirin – Hinata Pose 6 … made by Carolina Sautereau. I altered this pose slightly using my Animare HUD so that I could hold the Riot Bat in my right hand. Purchased as part of a set of Hinata poses at the current round of KUSTOM9, which is open from September 15th until October 10th. NEW.
KUSTOM9 – New Location