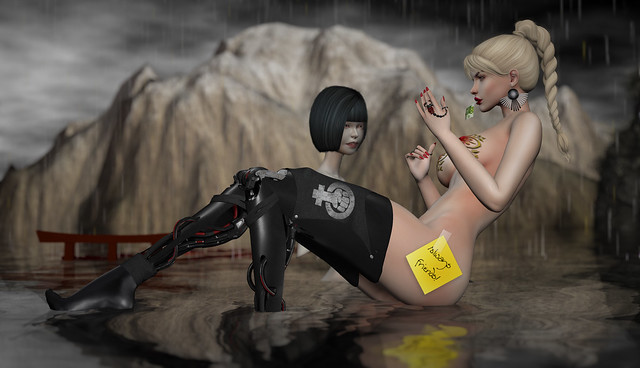 MINA Hair – Jennifer unrigged … made by Mina Nakamura. I am wearing this cute hair with a ponytail in a tone from the Blonds pack. This is available at The Clique event, which is open from March 24th through until April 4th. NEW.
The Clique

::GB:: Inori backdrop (Fullbright) … made by Takuya Jinn.
Most of this prop is submerged and I also made it considerably smaller than its original size. Purchased inworld at the GABRIEL Mainstore in March 2018.
NB: This prop is an inworld realisation of the Fushimi Inari Shrine in Kyoto, Japan – which I was lucky enough to visit in Real Life in March 2018. 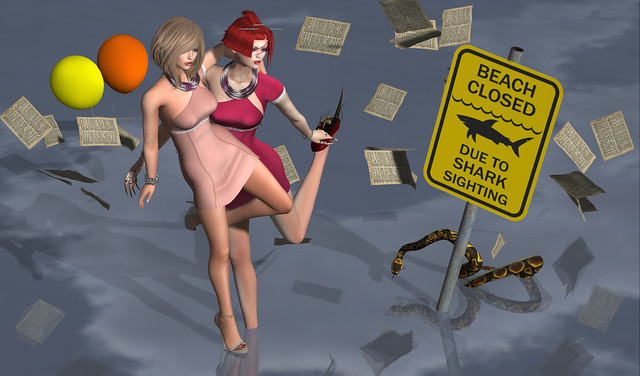 Well, I think we took a wrong turn somewhere along the way?

Bianca Necklace Full … made by Zib Scaggs. This is available at the current round of Shiny Shabby, which is open from June 20th until July 15th. NEW.
Shiny Shabby – Zibska

Bianca Necklace Full … made by Zib Scaggs. This is available at the current round of Shiny Shabby, which is open from June 20th until July 15th. NEW.
Shiny Shabby – Zibska

AZOURY – Neotropic Ballet Shoes for SLink PointeGold [Fiesta] … made by Aniki Seetan. These were available at the 2016 round of The Dark Style Fair, which finished on June 4th. NEW.

Kirin – Balloon ADD ME with Pose 1 … made by

The two-person pose that we used is Exposeur – I Can Do Anything … made by RubyStarlight Writer. Purchased on June 30th, 2016 which was the final day of the Exposeur Closing Sale.
Exposeur Final Closing Sale