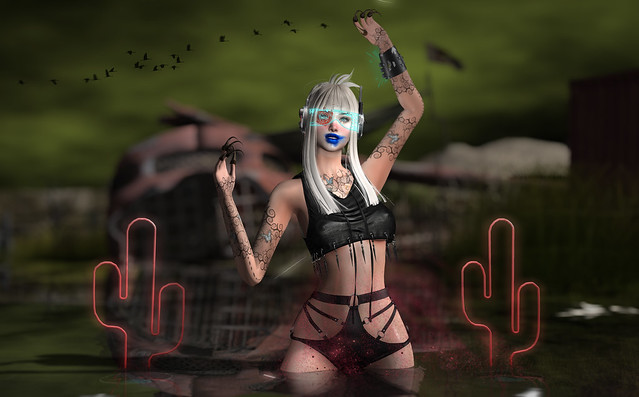 I love Elvis Costello’s 1978 “ballad” called Pump It Up cos it makes me want to get up and dance and shake all of my tail feathers at once!! 😀

But in today’s blog post, Alles is missing a tail – let alone tail feathers – so in recompense I have kitted myself out in some punky gear, as you can above. And this, dear readers, are my worn details.

Una&Mushilu CiberPunk glass 2 … made by Eifee Resident. Purchased at the most recent round of the NEO-Japan event, which finished on October 21st. NEW.

[CX] Mucronate Top – Leather ( Maitreya ) … made by Kamayari Resident. Purchased at the latest round of FaMESHed, which is open from November 1st through until November 27th. NEW.
FaMESHed
OR
FaMESHed Too

The props that I have used are following: